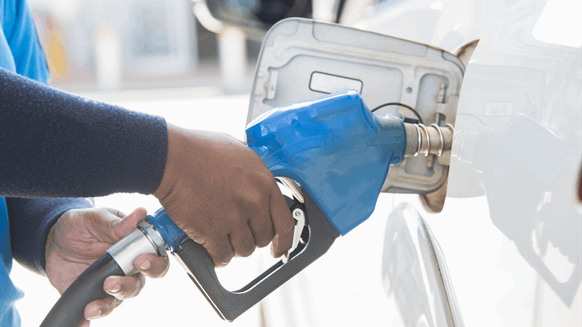 Gasoline prices have been sliding steadily for several weeks, and they're promising to get even cheaper.

(Bloomberg) -- Hold up on buying gasoline for a week, and the price could drop by an average 16 cents a gallon nationwide. If you fill up a Ford Expedition, that’s a nifty $5.36 in savings.

Gasoline prices have been sliding steadily for several weeks, and they’re promising to get even cheaper as crude prices fall and the U.S. moves into the summer driving season. Near Houston, in areas surrounded by refineries, the price is about $2 a gallon, according to data from GasBuddy.com.

Last year at this time, the average price nationally for regular gas at the pump was $2.92 a gallon, according to AAA. Now, following an 18% drop in crude oil prices in New York, the average sits at $2.75 at a time of year -- Spring time -- when the price usually peaks in anticipation of more drivers on the road.

"We did see a 7-cent decline in the national gas price last week, and I think you can look for another decline this week, so motorists would not be advised to be so fast to fill their tanks," said Patrick DeHaan, a GasBuddy.com analyst, by telephone. "I could see the national average down around $2.60 a gallon or even $2.59 gallon this week.”

That low a price would be an 11.3% drop from a year earlier, getting close to the size of the decline in crude prices over the same period. Still, some are paying much more than the average. While drivers in parts of Texas get to pay about $2 a gallon, motorists in parts of Northern California are forking over more than double that.

The gap between Houston and San Francisco prices was more than $1.50 a gallon on Sunday, according to AAA data. California prices are normally higher than in Texas, but this year fires and other breakdowns at oil refineries in the Golden State sent prices rocketing higher.

One key determiner to watch for looking forward, according to the Auto Club: Crude prices account for nearly 60% of the pump price. If the price of oil jumps globally as a result of output cuts by the Organization of the Petroleum Exporting Countries and its allies, and U.S. drillers export more to take advantage of that, the price of gasoline in the U.S. could rise as well, according to the AAA report.

To contact the reporter on this story:
Jeffrey Bair in Houston at jbair4@bloomberg.net

To contact the editors responsible for this story:
David Marino at dmarino4@bloomberg.net
Reg Gale, Carlos Caminada