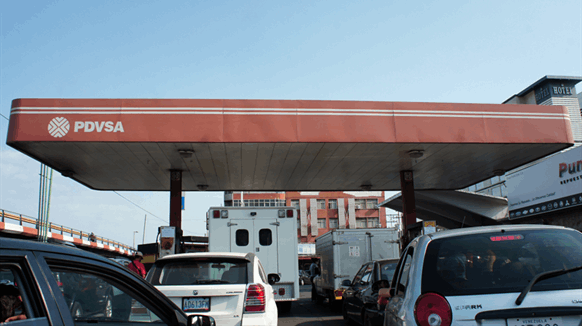 Following years of mismanagement and operational neglect, PDVSA is unable to supply the country with gasoline.

(Bloomberg) -- The first vessel in an Iranian convoy of ships bringing desperately needed fuel arrived in Venezuela, demonstrating both nations’ determination to undermine U.S. efforts to isolate the governments in Tehran and Caracas.

Following years of mismanagement and operational neglect, national oil company Petroleos de Venezuela SA is unable to supply the country with gasoline, idling not only millions of cars and buses but also emergency vehicles and trucks delivering food from farms to cities.

U.S. sanctions restricting PDVSA’s ability to import fuel from international markets have worsened what were once sporadic shortages, touching off days-long queues at filling stations and more frequent unrest. The isolation efforts have also fomented closer strategic ties between Iran and Venezuela as most international oil and shipping companies avoid Venezuela for fear of risking punitive measures by the U.S.

Two more tankers, the Fortune and Faxon, are expected to arrive in the coming days. This is the second time Iran has provided gasoline to Venezuela since the end of May, when a flotilla of five vessels discharged nearly 1.5 million barrels of Iranian gasoline and fuel additives, as well as parts for local refineries. Iran’s foreign ministry has said any attempt by the U.S. to stop them will be met with “a swift and decisive response.”

Iran’s shipments signal Tehran’s commitment to aiding its South American ally despite U.S. efforts to stymie such cooperation. In August, the U.S. seized the cargoes of four vessels carrying 1.1 million barrels of Iranian gasoline ostensibly headed for Venezuela. The move was described as the U.S. government’s “largest-ever seizure of fuel shipments from Iran” by the Department of Justice, which said the Islamic Revolutionary Guard Corps, designated a foreign terrorist organization, was behind the shipment.

U.S. special envoy to Venezuela and Iran Elliot Abrams said on Wednesday U.S. sanctions on Venezuela convinced Russia and China not to sell gasoline to Maduro’s regime and alluded to possible “snap back” sanctions in the coming days.

PDVSA and Venezuela’s information ministry declined to comment on the shipments.