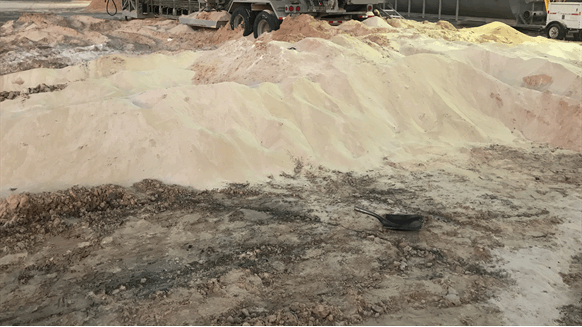 Just a year after rushing into America's busiest oil field with new mines, frac-sand producers may have overdone it.

(Bloomberg) -- Just a year after rushing into America’s busiest oil field with new mines, frac-sand producers may have overdone it.

West Texas sand used in the hydraulic fracturing process will drop 19 percent this year to about $30 a ton compared to 2018, according to industry consultant Rystad Energy AS. Sand pricing is a key financial input for oil explorers because fracking is the most expensive phase in drilling an oil well.

A slew of new West Texas mines close to Permian Basin drilling sites is elbowing Midwest mines that formerly dominated the frac-sand trade. Miners in and around Wisconsin that controlled 75 percent of the market in 2014 will see that diminish to 34 percent in 2020, Ryan Carbrey, Rystad’s senior vice president of shale research, told Petroleum Connection’s Frac Sand Industry Update conference in Houston on Wednesday.

“We do think that things continue to be rather sloppy from a pricing standpoint in 2019,” Chase Mulvehill, an analyst at Bank of America Merrill Lynch, said in a presentation during the conference. “We’ll see if people renegotiate contracts. What we’ve heard so far is people are actually starting to do that for some in-basin contracts.”

The sand oversupply has developed just as demand for fracking is taking a hit from the late-2018 slump in crude prices and more modest exploration programs by oil producers, Mulvehill said. Fracking demand is set to drop 3 percent in 2019, he said.