The recovery in global oil demand looks like it’s going to be slower than expected.

(Bloomberg) -- The recovery in global oil demand looks like it’s going to be slower than expected, as a resurgence in Covid-19 cases forces the re-imposition of lockdowns.

All three of the world’s main oil forecasting agencies — the International Energy Agency, the U.S. Energy Information Administration and the Organization of Petroleum Exporting Countries — have increased their assessments of demand destruction in the third quarter of 2020, even as they see the depth of the crisis in the second quarter being less bad than previously thought. 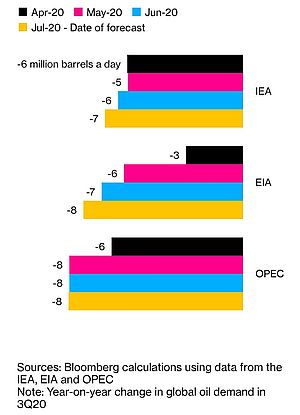 In their latest monthly reports, the three agencies all saw third-quarter global oil demand falling further behind last year’s level than they did in June, as the chart above shows. The average loss compared with the same period in 2019 is now 7.5 million barrels a day, compared with less than 7 million forecast a month ago and 6.5 million seen in May.

The fourth quarter looks a little better, but demand is still expected to be somewhere between 3.7 million and 4.6 million barrels a day below the same period in 2019. The IEA and EIA are at the more optimistic end of that range, with OPEC seeing the effects of demand destruction lingering longer.

Those numbers are still a lot better than the levels of demand destruction seen in the second quarter, which the three groups now see averaging 16.4 million barrels a day. All three have trimmed their assessment of the demand loss in the April to June quarter in their latest reports, but it still amounts to almost 1.5 billion barrels over the period, enough to power the entire world for half a month.

A resurgence in Covid-19 cases, particularly in North and Latin America, is leading to new lockdowns and causing concern that the rebound in oil demand will falter. Congestion on U.S. city streets is still well down on pre-lockdown levels. Delays in Los Angeles are about a third of what they were before restrictions were imposed, while in New York they’re at about 60% of normal levels. In Europe the picture is a bit different, with congestion on Berlin’s roads almost back to levels seen before restrictions were imposed, and other major cities on the continent not far behind.

The pace of economic recovery has slowed in several major economies, including the U.S., Canada and the U.K., with activity remaining around 60% of pre-pandemic levels, according to  Bloomberg Economics’ daily gauges.

Despite the concerns, the Joint Ministerial Monitoring Committee of the OPEC+ group of oil-producing countries recommended yesterday that members  ease back on output cuts from the beginning of August. The size of the headline output cut will be reduced from 9.6 million barrels a day to 7.7 million, but some of that increase in supply will be offset by deeper reductions from those countries that failed to implement in full the curbs they agreed for May and June. Much of the rest will be soaked up by higher domestic consumption in the producing countries themselves, leading Saudi Energy Minister Prince Abdulaziz bin Salman to remark that the additional volume of oil reaching the global market next month will be “barely felt.”

Despite the faltering recovery in oil demand and the extra OPEC+ supplies, all three agencies still see global oil balances flipping from surplus to deficit in the second half of the year and remaining that way throughout 2021 — as long as the group’s members maintain their discipline and stick to their production targets. They have done remarkably well so far, despite the public haranguing of a few laggards, but there’s still a long, long way to go.

To contact the author of this story:
Julian Lee in London at jlee1627@bloomberg.net

To contact the editor responsible for this story:
John Deane at jdeane3@bloomberg.net
Steve Voss