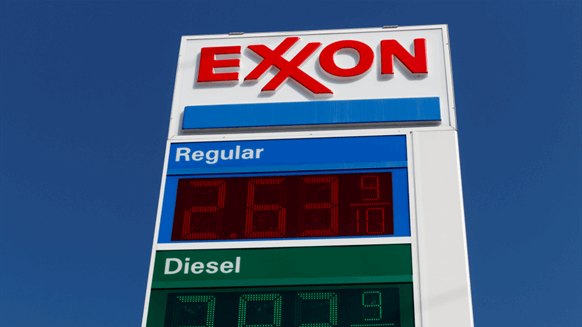 A third-quarter loss would suggest Exxon still isn't able to fund either its dividend or capital expenditure from operational cash flow.

(Bloomberg) -- Exxon Mobil Corp. likely made a third consecutive loss in the last quarter, heaping further pressure on the energy giant’s ability to pay its $15 billion-a-year dividend, currently the third-highest in the S&P 500 Index.

Exxon suffered further losses in its refining division in the third quarter while higher oil prices were likely not enough to push its production operations back into profit, the Irving, Texas-based company said Thursday in a filing. Refining margins took a negative hit of as much as $600 million in the period while chemicals made a small profit.

A third-quarter loss would suggest Exxon still isn’t able to fund either its dividend or capital expenditure from operational cash flow, meaning it’s reliant on debt to get by. The last time the company generated enough free cash to cover its dividend was the third quarter of 2018, according to data compiled by Bloomberg.

In aggregate, Exxon probably made a loss of about 30 cents a share, compared with analyst expectations of a 1-cent loss, analysts at Tudor, Pickering, Holt & Co. said in a note to clients. The update from Exxon will likely weigh on the shares, they said.

“We suspect investors will continue to focus on the path forward for the business with operating cost and capital cuts in focus to shore up the balance sheet in a bid to defend the company’s dividend,” the analysts said.

Exxon’s dividend yield has risen to more than 10% over the past few days, indicating shareholders believe the dividend is unsustainable at current levels and may be cut. Rival oil supermajors Royal Dutch Shell Plc and BP Plc slashed their payouts earlier this year as Covid-19 savaged oil demand globally. Reducing its dividend would be a seismic shift for Exxon, which has made a rising payout the keystone of its investment strategy for the last 37 years.