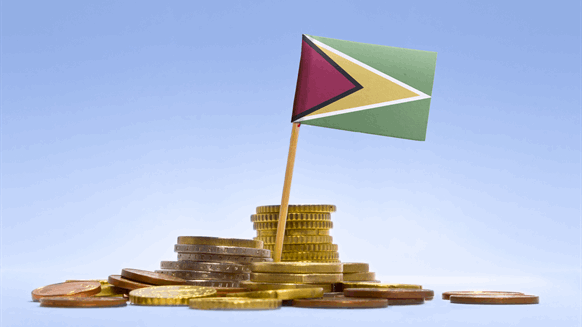 Exxon Mobil Corp. got such a "favorable" deal from Guyana, home to the biggest new deepwater oil play, that the tiny South American country should rewrite its tax laws, the International Monetary Fund said.

(Bloomberg) -- Exxon Mobil Corp. got such a “favorable” deal from Guyana, home to the biggest new deepwater oil play, that the tiny South American country should rewrite its tax laws, the International Monetary Fund said.

While Guyana should honor the existing deal, future contracts should ensure the state gets a higher portion of crude proceeds, the fund said in a report seen by Bloomberg News. The country, South America’s third poorest with an average per capita income of around $4,000, has little experience of dealing with multinational behemoths such as Exxon.

Terms of the 2016 contract “are relatively favorable to investors by international standards,” the IMF said in a report prepared for Guyanese officials. “Existing production sharing agreements appear to enjoy royalty rates well below of what is observed internationally.”

IMF officials have visited the nation multiple times over the past nine months as they help improve its legal, fiscal and regulatory frameworks before Exxon commences oil production in 2020. Guyana, whose entire population of 770,000 is about half the size of Philadelphia, has become one of Exxon’s five key global projects for the next decade due to the sheer size of its oil endowment.

“Government take is generally lower in frontier plays than in established areas as governments need to incentivize companies to undertake high-risk exploration,” Exxon said in a statement, citing a Wood Mackenzie Ltd. study that found Guyana in the middle range of the 148 jurisdictions evaluated.

With companies such as Total SA, Tullow Oil Plc and Repsol SA also exploring for oil in Guyana’s waters, time is of the essence. “The government could consider issuing a temporary moratorium on new licensing until a new fiscal regime is in place,” the IMF said.

Exxon’s total acreage in Guyanese waters covers 11.5 million acres, equivalent to about 2,000 leases in the U.S. sector of the Gulf of Mexico. Exxon leads a partnership group that includes Hess Corp. and China’s Cnooc Ltd. The IMF declined to comment beyond the report.

Expectations are high. Government revenues from Exxon’s first project, which involves pumping less than 15 percent of the crude found to date, are expected to peak at $700 million a year by the late 2020s, equivalent to the country’s tax take in 2016.

The government has no plans to change the Exxon contract, Mineral Resources Minister Raphael Trotman said by email. The terms cover the Stabroek Block where Exxon struck oil through its Liza-1 well in 2015. However, the government will have different terms for future contracts, Trotman said.

Exxon’s deal was procured partly because it entered the country in 1999, when the Guyanese coastline wasn’t regarded as promising oil territory by most of the industry. “It is not unusual to see more favorable fiscal terms for early investments in the extractive industries,” the IMF said in its report, which was delivered to Guyanese leaders in November.

To reap the benefits of oil, Guyana faces a familiar challenge: gaining as much revenue as possible without deterring investment. Politicians say they want to set up a sovereign wealth fund and avoid the resource curse -- the phenomenon whereby discovery of a valuable commodity stunts growth in other sectors of an economy, fueling corruption, conflict and currency swings that ultimately strand most of the population in poverty.

Either way, oil is poised to profoundly change Guyana, a country the size of Kansas that was colonized by the Dutch and British before obtaining independence in 1966. Its economy currently relies on agriculture and gold mining.

With first oil due in 2020, just five years after it was discovered, the government has much to do, the IMF said in the report. Exxon’s deal with Guyana gave it the lowest average effective tax rate among nine projects in countries that include Norway, Brazil, Peru and Trinidad & Tobago.

Open Oil, a Berlin-based company that advocates contract transparency, also found Guyana’s share of the Stabroek was low compared with both established and early-stage producing countries. Guyana will receive 52 percent of positive cash flow over the life of Exxon’s initial project, compared with between 63 percent and 72 percent for developments in Liberia, Mauritania, Ghana, Senegal and Papua New Guinea, it said in a March report.

The Exxon contract, which was published on a government website last year, provides Guyana with a 2 percent royalty on sales and 50 percent of profitable oil, once costs are repaid. Exxon and its partners can only deduct three-quarters of their costs each year, giving the government some cash in the first years of the project.

The IMF report recommends that Guyana:

“We intend on implementing as many of the recommendations as possible,” Trotman, the minister, said. In so far as the Exxon-led group’s contract is concerned, “the government has no intention of revisiting it at this time. For future contracts we certainly will be having updated terms.”