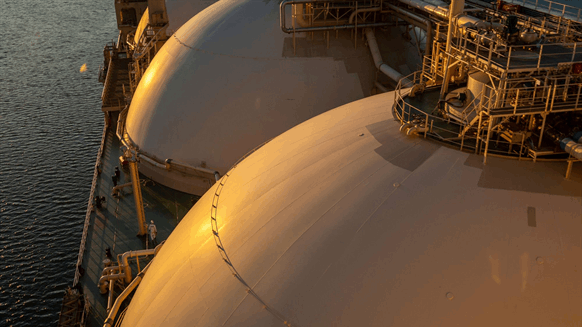 European natural gas prices declined amid growing stockpiles and imports of LNG, while the region tries to ease an unprecedented energy crisis.

European natural gas prices declined amid growing stockpiles and imports of liquefied natural gas, while leaders from the region continue to seek ways to ease an unprecedented energy crisis.

Gas storage levels on the continent are now about 90% full -- higher than last year, but still below inventories in October of 2019 and 2020 -- data from Gas Infrastructure Europe show.

Meanwhile, the European Union is considering a temporary limit on gas prices to ward off a potential recession, though it’s not yet clear what kind of mechanism officials will consider. Industry is concerned that such intervention may hinder supplies to Europe at a time when it needs to replace flows that would ordinarily come from Russia.

European countries have increased their gas stockpiles by ramping up LNG inflows month-on-month since June. European imports of liquefied natural gas may jump by 45-50% this year, according to Bloomberg Intelligence. However, LNG may only be able to replace about 30% of pipeline shipments from Russia, BI analysts Talon Custer and Patricio Alvarez said in a research note.

Russian gas exports to the region have diminished to a fraction of their levels in the fallout of the country’s invasion of Ukraine in February. While volumes are still passing through Ukraine, other routes have been halted, including the key Nord Stream link to Germany.

“European nations will likely have to refill gas storage in Summer 2023 without the help of Russian gas supplies, meaning they will become more heavily reliant on imported LNG,” Inspired Energy said in a market report.

A cooler-than-expected winter would accelerate draw-down at gas storage facilities, leaving the continent more vulnerable. Temperatures across northwest Europe are expected to drop in the second half of October, forecaster Maxar said in a report.

Germany is likely to consume 20% less gas this winter than last year, Deutsche Bank economists in a note. Even so, “rationing might only be avoided by hair’s breadth, both this year and next,” they added.