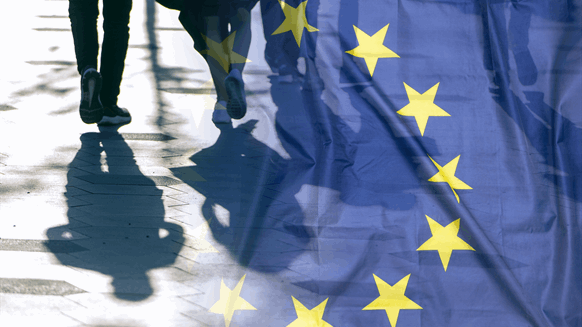 European Union diplomats are optimistic they can reach a deal as early as Thursday.

European Union diplomats are optimistic they can reach a deal as early as Thursday on a price cap level for Russian oil exports despite sharp splits over the plan, according to people familiar with the matter.

Poland on Wednesday rejected the EU’s executive arm’s proposed price of $65 per barrel as being too soft on Moscow, while Greece, whose shipping industry transports lots of oil, doesn’t want to go below $70.

Identifying the ideal price -- high enough to keep Russia’s oil flowing and avoid price spikes, low enough to cut funding for Russia’s war in Ukraine -- is the final high hurdle in a months’ long process in shaping the Group of Seven-led plan, which US officials have pushed.

Ambassadors are scheduled for more talks Thursday evening to continue their discussions, some of the people said. Major new European sanctions kick in on Dec. 5, creating an urgency to get the price and other details buttoned down.

It’s also clouded by a broader fight in the EU over how to contain an energy crunch that’s dragging down economies and threatening to spark outages or rationing. EU energy ministers are meeting Thursday to thrash out measures to contain the price of natural gas with some countries demanding a more muscular cap on that market.

On the oil cap debate, a senior government official within the price-cap coalition expressed confidence that EU governments would agree soon on a price. The official added that the price being debated -- around $65 a barrel -- fit well with criteria already agreed to by the coalition of countries backing the plan, adding that the price could be adjusted over time if necessary.

“We’re looking for ways how this can work and how one can find a common basis so that this can be implemented in an ideally pragmatic and efficient way while at the same time avoiding that this could lead to excessive disadvantages for the countries of the European Union,” German Chancellor Olaf Scholz told reporters Wednesday night. “But for my part, I want to say that I’m pretty confident that we’ll get this done soon.”

At $65, the price cap would be well above Russia’s cost of production. Russia is already selling its crude at discounts, and a high cap would likely have minimal impact on trading. Such a price would likely be at, or slightly above, the spot price for Urals, Russia’s key export grade.

The EU and G-7 had originally hoped to sign off on the price cap level on Wednesday. The cap needs the backing of all EU member states to be approved.

Oil prices fell earlier Wednesday after Bloomberg reported the proposed price range. One reason traders appeared to shrug it off is that insurers and shippers will simply have to make sure the cargoes they carry were sold below the cap price. If the cap comes in close to existing discount levels, Russia could claim it’s conducting business as usual.

“Russian oil currently trades at a significant discount compared to Brent, around $65 per barrel,” said Simone Tagliapietra, a senior fellow at the Bruegel think tank in Brussels. “Should the G-7 price cap for Russian oil be set at a similar level, it wouldn’t do much harm to Russia.”

The priorities behind setting the price cap have been somewhat ambiguous: The US wanted to make sure Russian oil kept flowing while also trimming Moscow’s revenue. The EU sanctions initially appeared more focused on reducing revenue for Vladimir Putin’s war machine. The result of the hard-negotiated cap has been to soften the impact of the impending EU sanctions.

Separately, the EU is working on a new sanctions package that it hopes to present to member states soon, one of the people said. Poland and others have been pushing the bloc’s executive arm to accelerate that timeframe.