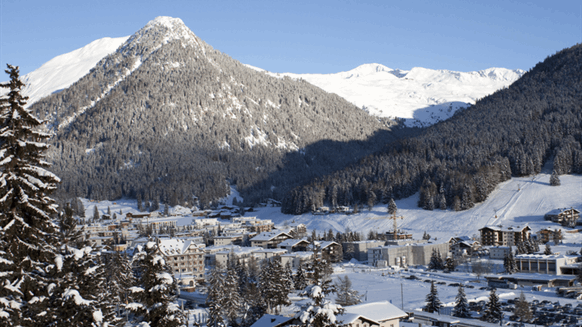 (Bloomberg) -- Capturing carbon dioxide from the fossil-fuel industry is key to slowing dangerous global warming, energy chiefs said in Davos as climate concerns dominated the annual business forum more than ever before.

Oil and gas producers are under mounting pressure to help prevent a damaging rise in temperatures, and carbon capture is increasingly luring investors as a tool to curb emissions. Whether pulled from the exhaust of smokestacks or from the open air, the CO2 can be buried underground or used to extract oil.

“There are investors that care, that want to protect our environment; those investors are starting to make a difference for us,” Vicki Hollub, chief executive officer of Houston-based Occidental Petroleum Corp., said on a panel in Davos. “Within two years we will be building the largest direct air capture facility in the Permian.”

Occidental’s air capture site will separate carbon dioxide directly from ambient air. The CO2 can then be injected into oil reservoirs to boost output in Texas’s Permian Basin.

“If we can perfect direct air capture, then we can use it anywhere,” Hollub said.

Climate concerns dominated the panel discussion, and run through the entire program of this year’s World Economic Forum. Climate campaigner Greta Thunberg spoke to a packed room in the WEF’s opening session, issuing a sharp rebuke to leaders over the world’s failure to curtail emissions.

“Carbon capture is very important because we have still a huge amount of fossil fuels in the market,” Birol said in a Bloomberg Television interview. “It is the only technology which can marry the fossil fuels we have -- oil, gas, others -- and our climate goals.”

To contact the reporters on this story:
Francine Lacqua in Davos at flacqua@bloomberg.net;
Jeremy Hodges in London at jhodges17@bloomberg.net

To contact the editors responsible for this story:
James Herron at jherron9@bloomberg.net
Amanda Jordan, Helen Robertson