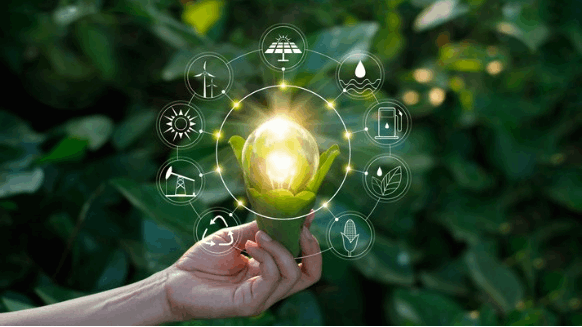 "What's been front and center has been the extreme volatility and carnage that's occurred in the energy sector," said one energy analyst.

(Bloomberg) -- Just as 2020 seemed like it might be a breakthrough year for corporations looking to combat climate change, the novel coronavirus emerged.

Back in September, Time published a special climate issue titled “2050: How Earth Survived,” calling out the fossil-fuel industry and foreshadowing drastic changes and consequences the world would have to embrace to avoid catastrophe. In January, teen climate activist Greta Thunberg lectured United Nations leaders about greenhouse gas emissions after sailing across the Atlantic Ocean. That same month, BlackRock Inc.’s Larry Fink pushed environmental issues to the top of Wall Street’s agenda.

But by the time March came around, corporate leaders were more concerned with talk of virus testing, ventilators—and financial survival.

So sudden was the shift that a Bloomberg analysis of Standard & Poor’s 500 companies found climate change-related discussions dropped 50% during first-quarter earnings calls, compared with those for the previous quarter. Conversations about liquidity, cash flow and debt payments dominated, with many executives forced to take extraordinary measures to keep their businesses afloat in a suddenly devastated global economy.

“Over the last two years, climate talk had been steadily going up,” said Bill Weihl, who heads Climate Voice, an initiative designed to get companies to go “all in” on climate. The pandemic brought much of that to a halt.

Bloomberg analyzed mentions of climate change and related terms across all companies of the S&P 500 that held earnings calls for the first calendar quarter of 2019 through the first quarter of 2020. Companies were considered to have discussed climate change if they spoke about at least one of the search terms during the calls.

Discussions about the accelerating climate crisis dropped for every industry in the S&P 500. Executives at energy companies—crucial to any transition to renewable sources—mentioned climate change 58% fewer times than they did during fourth-quarter earnings calls with shareholders and analysts. Technology companies saw a 53% fall-off, and even worse were financial-services companies, where the drop was 69%.

Robert Swan, chief executive officer of Intel Corp., the world’s biggest chipmaker, said in his company’s fourth quarter 2019 earnings call that “it’s important to us to be a leader in environmental sustainability, and we’re investing to continue to increase the energy efficiency of our operations and our products.” But during Intel’s first-quarter call this year, there was no mention of the environment. “Intel is committed to accelerating access to technology that can combat the current pandemic and enable new technology and scientific discovery to better prepare society for future crises,” Swan said.

To be sure, future crises could be climate-related, but the company didn’t get specific.

Hikmet Ersek, CEO of Western Union Co., one of the largest U.S. providers of money-transfer services, was discussing the company’s plan to reduce greenhouse gas emissions during its fourth quarter earnings call. Flash forward to the company’s first-quarter call, during which Ersek spoke of a different type of environment: the “market environment impacted by Covid-19.”

Executives for oil and gas companies such as ConocoPhillips, Diamondback and Phillips 66 touted their energy transition goals earlier this year. In early February, ConocoPhillips CEO Ryan Lance said it was “imperative” that the fossil fuel giant take a leadership role in environmental, social and governance matters. By April, the language on the call shifted to production cuts, liquidity and demand.

“What’s been front and center has been the extreme volatility and carnage that’s occurred in the energy sector,” said Jennifer Rowland, an energy analyst at Edward Jones. “Some of these companies are still in survivor mode, never mind thinking about the energy transition over the next decade. The whole sector has been forced to think in the short term right now, and they don’t really have the luxury of being long-term focused at this particular moment, given the extreme dislocations that have occurred.”

What may be surprising however are the industries that managed to keep global warming front-of-mind during coronavirus-dominated calls. Sustainability talk in the utility sector did decline in the first quarter, but only by 31%. The drop at industrial companies was just 10%, Bloomberg’s analysis found.

Utilities—specifically electric companies—face a reckoning for their role in climate change-related disasters, such as the 2018 Camp Fire in California that killed 85 people. PG&E Corp. recently pleaded guilty to involuntary manslaughter for its role in sparking the wildfire.

For another California-based electric utility, climate change has remained at the forefront of conversations throughout the crisis. On Edison International’s most recent earnings call, CEO Pedro J. Pizarro said the company remains committed to its focus on clean energy.