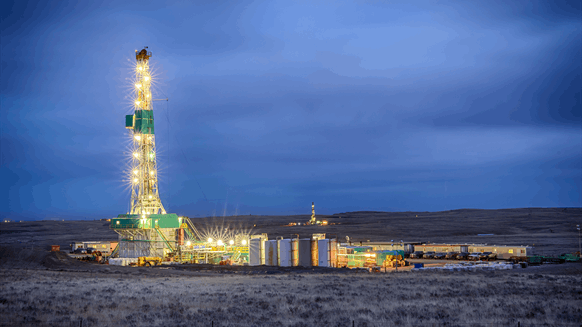 Investors will focus on how profitably companies are able to produce from their current holdings, Suttles says.

Instead, investors will focus on how profitably companies are able to produce from their current holdings, Suttles said in an interview in New York. Encana, which has spent about four years reworking its portfolio of holdings to four top North American plays, expects to be a leader among its peers on that front, he said.

“The race for the land is kind of over,” Suttles said. “Now it’s what are you going to do with the land.”

Encana expects to increase cash flow about 25 percent a year through 2022, the Calgary-based company said Wednesday in a presentation to investors. Cumulative free cash flow in that period will be about $1.5 billion, assuming oil prices at $50 a barrel. Driving those gains will be a profit margin that expands to roughly $16 per barrel of production in five years, up from about $11 currently, the company said.

For Encana, the key to maximizing production from its land has been a drilling technique it calls cube development, which entails drilling multiple wells in multiple zones simultaneously, rather than drilling the wells piecemeal over a longer period of time.

Encana’s method, while requiring more coordination to accommodate so much activity on a single pad, reduces the problem of the early wells reducing the pressure in a zone and hurting the performance of those drilled later on. The company has drilled as many as 19 wells at a time, whereas common practice among other operators has been to drill four or fewer wells at a time.

The company also avoided some of the service-cost inflation that has hurt other operators in the Permian by contracting for its services farther ahead of time and ramping up activity earlier than other drillers, he said. Suttles said the company has made other improvements, such as in water handling and frack-sand procurement, all of which have helped drive Encana’s well costs lower than a year ago, he said.

“I think we’re through the worst of the inflation phase,” he said. “That’s what we’re seeing in the marketplace. It was pretty intense in the first half of the year.”

So far, investors have largely approved of Encana’s results. The shares have outperformed Canadian peers over the past three months, rising 24 percent while the S&P/TSX energy index rose 3.6 percent. They were up about 3 percent at C$14.72 as of 12:01 p.m. in Toronto, after earlier gaining as much as 4.8 percent.

Encana has transferred its technological advances among its four core holdings, which also include the Eagle Ford in Texas, along with the Montney and Duvernay in Canada. Those four holdings now account for about 90 percent of Encana’s production after it sold natural gas assets in Colorado to a private equity firm for $735 million last month, nearly completing its drive to concentrate its portfolio. Proceeds from the sale were used to improve the company’s balance sheet.

The company also owns a position in the San Juan Basin in New Mexico. While the company hasn’t decided on whether it will develop or sell the holding, it has drilled six wells there, and the results have been promising, Suttles said.

“So far it’s quite encouraging,” Suttles said. “It looks like they’re going to make it a hard decision.”

The extra cash the company starts to generate from its operations isn’t likely to go to early debt repayment, since the company only has about $500 million of debt due in 2019 and the bulk of its borrowings due in 2030 or later, Suttles said. However, all other options are on the table, and the company will likely decide how to use those funds in 2019, he said.