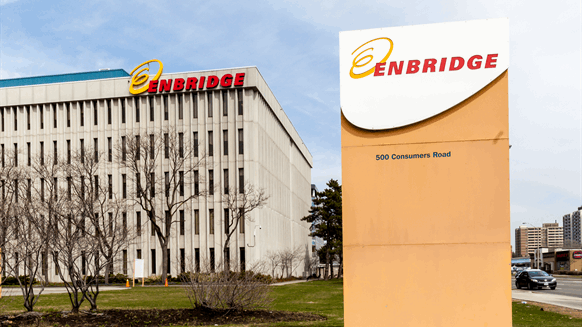 The $6.5B project would add 370,000 barrels of daily shipping capacity from Hardisty to Superior, Wisconsin.

The department said the Public Utilities Commission should reconsider the certificate of need it granted the project, arguing that Enbridge failed to submit a long-range forecast for demand for the oil that the pipeline carries, according to a filing that Minnesota Attorney General Keith Ellison submitted on behalf of the department on Thursday.

The pushback from the state could present further challenges to a project that already has faced delays amid opposition from environmentalists and indigenous groups. The Line 3 expansion is a key project for Canadian oil producers, who have suffered from a lack of pipeline capacity that has weighed on local crude prices and restrained their ability to boost production.

The roughly C$9 billion ($6.5 billion) project would add 370,000 barrels of daily shipping capacity from the Alberta oil hub of Hardisty to Superior, Wisconsin.

Enbridge, based in Calgary, said the petitions for reconsideration were “an expected next step” in the regulatory process, and they raise issues that the commission has previously considered and rejected.

The regulators and an administrative law judge have both agreed that projections show the extra capacity on Line 3 will be needed for years to come, Enbridge said.

“Enbridge’s Line 3 Replacement Project is the most studied pipeline in Minnesota’s history,” the company said in a statement. “It has already undergone an extensive contested case hearing process lasting nearly five years.”

Other groups, including the Red Lake Band of Chippewa, White Earth Band of Ojibwe, Honor the Earth, the Sierra Club and youth climate activists, also asked the commission to reconsider the certificate of need.

To contact the editors responsible for this story:
Simon Casey at scasey4@bloomberg.net
Carlos Caminada, Catherine Traywick