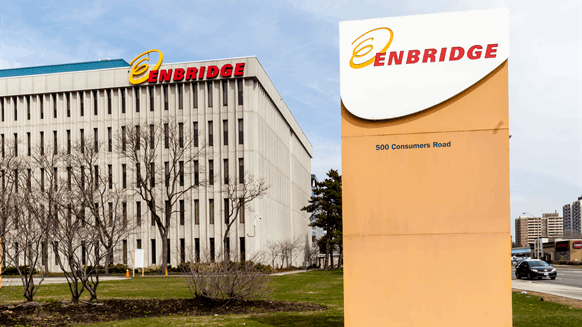 Minnesota regulators plan to conduct a longer, contested process for granting the project a key permit.

The deadline for the project’s Water Quality Certificate Permit was extended to Nov. 14, from a previous target of Aug. 15, Calgary-based Enbridge said Wednesday. The company said it will continue to work with other permitting agencies to try to allow for construction to begin this year.

The longer permitting process is just the latest setback for a project that has faced opposition from environmentalists and indigenous groups and already was pushed back by at least a year because of regulatory hurdles. The C$9 billion ($6.7 billion) Line 3 expansion would add 370,000 barrels of daily shipping capacity from the Alberta oil hub of Hardisty to Superior, Wisconsin, providing relief to Canadian producers that have suffered from a lack of pipeline space.

Robert Kwan, an analyst at Royal Bank of Canada, said in a note that the line could still meet his expected startup date of the third quarter of 2021, but the revised permitting schedule makes that possibility more of a “best-case scenario.”

Enbridge said it will continue with pre-construction activities and that it can complete the project within six to nine months after receiving final permits. With the permitting delay, the company now expects the majority of the project’s remaining $1.5 billion of capital spending to occur next year.

DAVE SIM  |  June 04, 2020
this is another Democratic state governments way of agonizing and stopping a Canadian company providing safe secure oil to US refineries thus on to its US Citizens. Do US Citizens want to rely on foreign oil while supporting OPEC members and some others who basically want to kill American citizens around the world using money gained by shipping oil to the USA. this makes no sense to stop a pipeline been built to serve the USA.
RELATED COMPANIES
Company: Enbridge more info