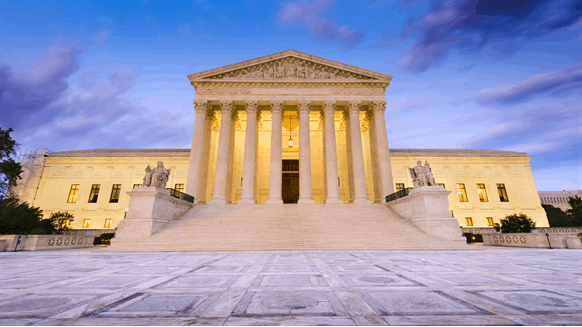 (Bloomberg) -- The fate of Dominion Energy Inc.’s planned $8 billion Atlantic Coast Pipeline will be tested Monday, as the U.S. Supreme Court hears arguments on a crucial permit that would let the natural-gas line cross under the Appalachian Trail.

Dominion and President Donald Trump’s administration are asking the high court to jump-start the long-delayed project after a federal appeals court threw out the permit issued by the U.S. Forest Service.

The case combines legal issues about federal agency jurisdiction with big stakes for the natural-gas industry and the environment. The court’s ruling, due by June, could have far-reaching implications for pipelines seeking to cross the Appalachian Trail, which stretches from Maine to Georgia.

A ruling in Dominion’s favor would eliminate the biggest obstacle to the 600-mile (965 kilometer) pipeline, which would carry as much as 1.5 billion cubic feet of gas per day from the Marcellus shale basin in West Virginia to customers in North Carolina and Virginia.

Dominion, which is developing the pipeline with Duke Energy Corp., says it expects to begin construction by mid-year and complete it by the end of 2021. That, however, presumes a victory at the Supreme Court and successful resolution of other issues, including a pending review of the impact on endangered species.

“The Supreme Court case is critical for the project, but it’s not a silver bullet for construction across the Appalachian Trail,” said Brandon Barnes, an analyst at Bloomberg Intelligence.

The case will also affect EQM Midstream Partners LP’s Mountain Valley gas pipeline from West Virginia to Virginia. Mountain Valley told the Supreme Court in December that the appeals court ruling forced a halt to its project, which is 90% complete at a cost of more than $4.3 billion.

Dominion and the Trump administration contend that while the National Park Service manages the Appalachian Trail, the underlying land is part of a national forest -- putting it within the Forest Service’s jurisdiction.

They say the appeals court ruling would create something Congress never intended: a massive barrier separating consumers on the eastern seaboard from inland energy resources.

“The logic of the 4th Circuit’s decision is to create a 2,200-mile barrier to pipeline rights-of-way, with enormous consequences for economic development and settled ways of government administration,” Atlantic Coast argued in court papers.

The environmental groups challenging the permit, led by the Cowpasture River Preservation Association, say advocates of the pipeline must get Congress to change the law if they want permission to cross the trail.

“This case is not about whether the pipeline is a good idea,” the environmental groups argued. “It is about the statutory protection Congress has afforded to land in the National Park System, including the iconic Appalachian Trail.”

Otisbulldog  |  February 24, 2020
Ridiculous. Does the court want her to starve the east coast of energy, putting us back in thrall to OPEC oil? Pipeline would be covered by a plethora of environmental protections in any case.
RELATED COMPANIES
Company: Dominion Energy Inc. more info