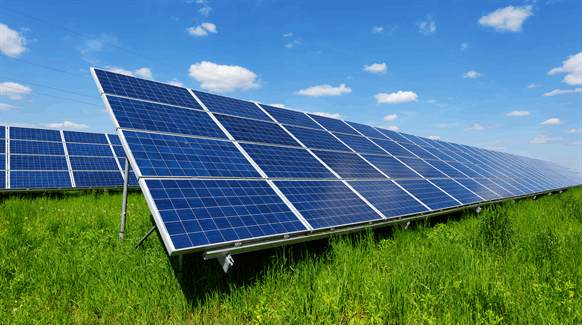 Egypt has inaugurated the first solar power plant at a remote desert complex where the government plans to generate as much as 1.8 gigawatts from the sun, cutting the most populous Arab nation's reliance on dirty and expensive fossil fuels.

(Bloomberg) -- Egypt on Tuesday inaugurated the first solar power plant at a remote desert complex where the government plans to generate as much as 1.8 gigawatts from the sun, cutting the most populous Arab nation’s reliance on dirty and expensive fossil fuels.

The plant, developed by Germany-based Ib Vogt GmbH and a local company called Infinity Solar Systems, began supplying the national grid in December, Ib Vogt Chief Executive Officer Anton Milner said in an interview. The 64-megawatt facility is the first of 32 units that the government targets for construction at Benban Solar park in southeastern Aswan province. The project, with all the plants, is to be completed next year at a cost of $2.8 billion.

“In this plant, we have 200,000 solar panels and 780 sun trackers that allow the panels to move toward the solar position throughout the day,” Amine el-Edghiri, Ib Vogt’s project manager, said during a media tour of the facility 650 kilometers (400 miles) south of Cairo on the fringes of the Nubian Desert. The photovoltaic modules arrayed across 95 hectares (235 acres) can produce enough power to supply 20,000 households, el-Edghiri said.

Egypt currently produces more than 90 percent of its power from oil and natural gas, according to data from Bloomberg New Energy Finance. Benban Solar park, along with other projects in planning, should help Egypt scale back its use of hydrocarbons as the country targets generating 20 percent of its electricity from renewables by 2022.

Formerly a gas exporter, Egypt must now import liquefied natural gas, or LNG, at a high cost to meet its energy needs. New gas fields that have started production, including the giant offshore Zohr field operated by Eni SpA, should help the country close its supply gap, trim its import bills and maybe even resume exports. Solar and wind energy projects will help transform the country’s power mix.

Egypt’s first round of so-called feed-in tariffs for solar power led to the installation of fewer than 200 megawatts of projects, out of several gigawatts of applications, due to commercial terms that many investors considered onerous. The government amended its terms in the second phase of the tariff program, including a change to allow international arbitration, to try to entice a greater number of foreign lenders and investors.

The second phase was more successful, with many projects securing financing. Improvements in technology making it cost-effective for investors to exploit the country’s abundant sunshine also made a difference.

Most countries are avoiding feed-in tariffs for competitive tenders that force developers to bid against each other for projects. Egypt issued its first competitive solar auction late last year to build a 600-megawatt plant in the West Nile region as it tries to drive down the cost of clean energy. The auction has attracted 18 applicants.

“It’s a natural progression,” Milner, IB Vogt’s CEO, said at the solar park. “The auction-based schemes will basically be more competitive.” Milner’s company plans to build three more units at Benban and connect them all with the national grid as early as the fourth quarter, he said.