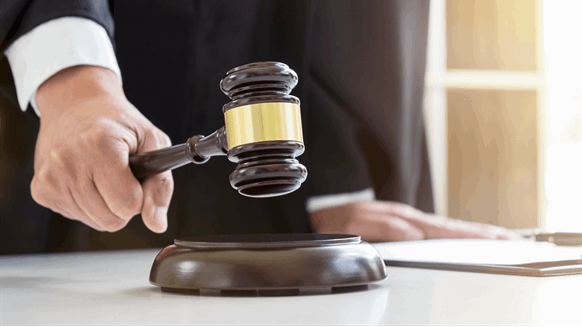 The leadership crisis in Venezuela could lead to an odd legal situation in the U.S.

(Bloomberg) -- The leadership crisis in Venezuela could lead to an odd legal situation in the U.S. -- a Delaware judge may be asked to decide who is the legitimate president of the South American country.

The issue could arise in the U.S. because of the power struggle over Citgo Petroleum Corp., the Houston-based refiner owned by Venezuela oil giant Petroleos de Venezuela SA. Last week, Juan Guaido, the U.S.-backed head of Venezuela’s National Assembly, named new directors to Citgo and PDVSA, a critical part of his strategy to seize oil assets and oust the regime headed by autocrat Nicolas Maduro, who remains in control of the military and other key parts of the government.

While the old directors remain in place, at least on paper, Citgo’s new board is certainly acting as the legitimate one. It met Thursday in a formal session and is expected to name a new chief executive officer.

If, as is likely, Maduro challenges those moves, the legal questions would move to the U.S., where Citgo owns three refineries and more than 40 terminals. Central to the issue is who is the true president of Venezuela -- Maduro or Guaido -- as seen by U.S. courts.

How are Citgo and PDVSA governed now?

PDVSA is state-owned and Citgo is its largest asset, sending much-needed cash back to Caracas before U.S. sanctions kicked in. Citgo’s parent, PDV Holding Inc., is incorporated in Delaware. Under Delaware law, Citgo is controlled by the refiner’s current board, which was appointed by Maduro.

How could Guaido wrest control away?

To have Delaware recognize Guaido’s new board members, his lawyers must deliver to Citgo’s registered agent what’s known as a corporate consent. It would formally add his board nominees and remove Maduro’s. And it would be issued by Guaido under the claim that he is Venezuela’s legitimate leader. That’s the key. The president of Venezuela is the controlling shareholder of PDVSA and PDV Holding. Delaware law gives controlling shareholders wide latitude in deciding who occupies board seats and managerial positions.

He could argue that he is the rightful head of the Venezuelan government. Therefore, only he has the right to name the PDVSA and Citgo boards. To get the issue in the courtroom, a member of his government or one of the displaced directors could sue in Delaware’s Chancery Court, disputing the ouster of current directors as a violation of the state’s corporate statutes.

Unclear, of course, but for purposes of deciding who’s in charge of Venezuela under U.S. law, that’s easier. Article II of the Constitution gives the president exclusive authority to recognize -- or to not recognize -- foreign governments. And in this case, President Donald Trump (and more than 30 other countries) has recognized Guaido as the leader of Venezuela. That means he’s the legitimate president of Venezuela, in U.S. eyes, and thus has the right to control Citgo and its American assets. A judge could also punt on the question, concluding it’s a political question that can’t be ascertained in the U.S.

While the question hasn’t been presented very often, at least two federal courts have considered cases involving rival governments, siding with the government recognized by the U.S. In 1952, a California judge ruled against China’s Communist government under Mao Zedong and in favor of the Nationalists in Taiwan, over a claim to government funds held in the U.S. Then in 1988 a court in New York ruled against the government of Panama’s Manuel Noriega, which was also seeking access to funds held in the U.S. The judge ruled in favor of Noriega’s rival, who had been recognized by the U.S., even saying that Noriega’s government lacked standing -- the ability to argue its case in court -- because it lacked official recognition.

So far, no one has filed a direct challenge calling on a court to invalidate the other side’s claim to control Venezuelan oil and other assets. Venezuela is currently named in at least 18 older suits in U.S. courts, many of which seek compensation for assets expropriated under previous Venezuelan president Hugo Chavez. PDVSA and Citgo are involved in many more. At this point, both state and federal courts in the U.S. have remained on the sidelines in the control fight. But two U.S. law firms have read the handwriting. They flipped from representing Maduro’s administration to Guaido’s government in older, unrelated cases.