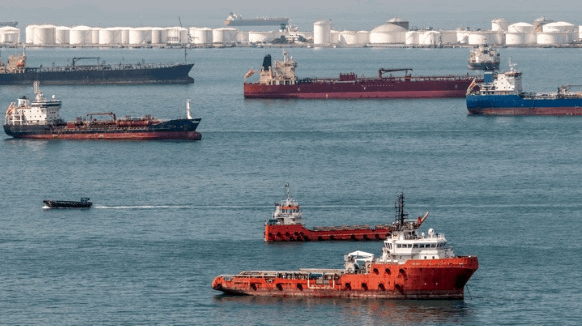 Exports from Saudi Arabia rose by more than 480,000 barrels a day, almost exactly offsetting the drop in shipments from the UAE last month. Kuwait and Iraq increased flows by smaller amounts.

The four nations shipped a total of 13.61 million barrels a day of crude and condensate last month, up by 164,000 barrels a day from August, tanker-tracking data monitored by Bloomberg show.

Flows from the four producers -- which account for more than 70% of production among members of the Organization of Petroleum Exporting Countries -- rose to South Korea, but shipments to all other major buyers including China were down, based on preliminary indications of ship destinations.

Observed flows from Iran have been excluded, as tankers often disappear from tracking for weeks.

With more than 20 million barrels of oil on ships yet to signal a final destination, estimates of flows to individual countries are subject to potentially large revisions.

Shipments to South Korea rebounded to the average level seen during the 12 months through March, before the second quarter surge and subsequent slump. Saudi Arabia, the UAE and Kuwait all boosted flows, lifting shipments by a combined 350,000 barrels a day, more than twice the size of the drop in exports from Iraq.

Aggregate Persian Gulf crude flows to India edged lower in September, as refinery runs in their closest major market remained subdued amid anaemic diesel demand. Shipments were about 460,000 barrels a day, or 17%, below the average seen in the 12 months through April.

A surge in shipments to China from Iraq and Kuwait was more then offset by lower flows from Saudi Arabia and the UAE, leaving preliminary estimates of the volume of crude sent to the Asian nation down by 100,000 barrels a day compared with the revised August figure.

Crude and condensate flows to Japan edged lower in September, with an increase of 100,000 barrels a day from Kuwait more than offset by similar sized declines from both Saudi Arabia and the UAE. Overall flows remained almost 700,000 barrels a day, or nearly 30%, below first-quarter levels, before the Covid-19 pandemic slashed demand.

Note: The figures above include exports from northern Iraq via Ceyhan in Turkey and outflows from the UAE’s Indian Ocean coast and from Saudi Arabian Red Sea ports. They include crude and condensates, a light form of oil extracted from gas fields. Figures for flows to individual destinations are subject to change, especially when ships pass transit points like Singapore and the Suez Canal.