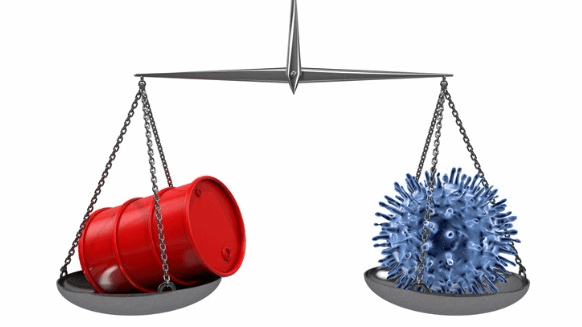 Futures in New York slid 5.9 percent to the lowest in a week on Wednesday.

(Bloomberg) -- A spike in U.S. coronavirus cases is threatening the oil market’s recovery from its historic plunge into negative territory.

Futures in New York slid 5.9% to the lowest in a week on Wednesday. The decline comes as U.S. crude inventories rose for a third week to a fresh record, placing added pressure on a market already weighed down by fears that a resurgence of the virus could force states to resume lockdowns that were only recently lifted.

New cases are surging across the U.S., with Florida and California on Wednesday reporting daily records. In Houston, the epicenter of the U.S. oil industry, demand for intensive-care unit beds jumped 10% in one day. New York, New Jersey and Connecticut announced that visitors from any state that has a rate of positive tests above 10% must quarantine for 14 days to avoid a resurgence.

“It’s generally a risk-off day around coronavirus cases and implications for longer-term demand,” said Nick Holmes, an analyst at Tortoise in Leawood, Kansas, which manages $11 billion in energy-related assets.

Oil has more than doubled in value since the end of April, staging a spectacular rebound after its crash below zero -- but the recovery remains vulnerable. U.S. gasoline consumption is rapidly improving, but diesel inventories have expanded for 11 of the last 12 weeks, signaling weak trucking and industrial demand.

Domestic oil inventories are also rising, reaching almost 540 million barrels last week, according to the Energy Information Administration. Some of the recent strength in physical crude markets is waning too. Differentials for key U.S. crude grades have weakened, and the global Brent benchmark has slumped back into a contango structure, signaling oversupply.

Elsewhere, the International Monetary Fund downgraded its outlook for the world economy, projecting a significantly deeper recession and slower recovery than it anticipated just two months ago.

Still, there are reasons for hope as OPEC and its allies work to trim global oil supplies and demand picks up in major oil-consuming nations, including China.

“By the middle of July, inventories will be showing a strong draw, and that’s a result of demand going up and supply curtailments around the world,” said Ed Morse, head of commodities research at Citigroup Inc., in a Bloomberg Television interview.

--With assistance from Alex Longley and Sharon Cho.

To contact the editors responsible for this story:
Mike Jeffers at mjeffers2@bloomberg.net
Jessica Summers, Christine Buurma