ConocoPhillips to Acquire Permian Operator in $9.7B Deal 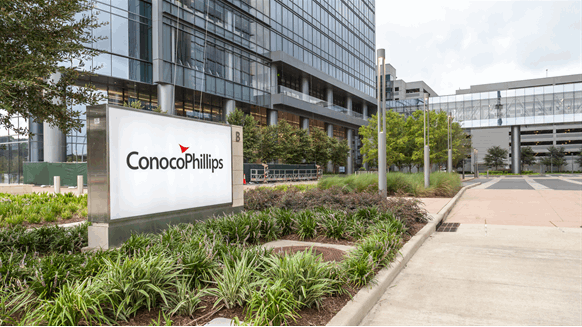 ConocoPhillips agreed to buy Concho Resources Inc. for about $9.7 billion in stock.

(Bloomberg) -- ConocoPhillips agreed to buy Concho Resources Inc. for about $9.7 billion in stock, the largest shale industry deal since the collapse in energy demand earlier this year and one that will create a heavyweight driller in America’s most prolific oil field.

Investors will get 1.46 Conoco shares for each Concho share, the companies said Monday in a statement. The transaction represents a 15% premium over Concho’s closing price on Oct. 13, the last trading session before Bloomberg News first reported the companies were in talks.

The pandemic-induced price crash and lackluster global economic recovery have accelerated the push for consolidation across the shale patch, which is under severe financial strain after years of debt-fueled growth. The combination of Conoco and Concho will be one of the dominant operators in the Permian Basin of West Texas and New Mexico, rivaling only the likes of Occidental Petroleum Corp. and Chevron Corp. in terms of crude output.

The deal may also signal further mergers and acquisitions in the sector. Despite a compelling rationale for more consolidation in order to cut costs, a lack of cash and Wall Street’s antipathy toward the sector has, until recently, made it hard to get deals across the line.

But with oil stable at around $40 a barrel, there are signs that M&A is now gaining momentum. Chevron Corp. completed its acquisition of Noble Energy Inc. in early October, and in late September Devon Energy Corp. announced it was buying Permian operator WPX Energy Inc. Unlike some shale deals in 2019, Devon’s tie-up with WPX was well-received, with both companies agreeing on a small deal premium. That follows investor criticism of some deal premiums last year for being excessive.

The Concho takeover is Conoco’s biggest under its current chief executive officer, Ryan Lance, who until now has sought to position the company almost as an anti-shale option for Wall Street, touting little-to-no-growth, steady cash flow and disciplined spending.

While Lance has made no secret of his desire to take advantage of the downturn to expand in shale, he said in July that any transaction must meet Conoco’s criteria of having a low cost of supply while being able to compete with the rest of the company’s portfolio.

Houston-based Conoco emerged from the oil market slump in a relatively strong position with about $7 billion of cash on hand. It recently resumed share buybacks. But its growth outlook is challenged: second-quarter production was down by almost 25% from a year earlier after it joined many other U.S. drillers in curbing output in response to lower prices.

Conoco and Concho said on a conference call that the deal didn’t arise from a need to fix anything but rather a desire to bulk up.

“Evaluating the go-forward size and scale really becomes more and more important,” Concho CEO Tim Leach, who will be executive vice president and president of the merged companies’ operations in the lower 48 U.S. states, said on the call. “The ‘why now’ is that we have common vision on this, and creating a company that can attract capital and be a leader in that regard is the compelling reason why we wanted to move now.”

Adding Concho will dramatically alter Conoco’s production profile. The Midland, Texas-based shale company is entirely focused on the Permian and pumped 319,000 barrels in the second quarter, about six times what Conoco produced there.

The combination will save $500 million a year by 2022, and hand shareholders more than 30 percent of cash from operations through dividends and other distributions, the companies said.

Concho “was an attractive company and had one of the deepest tier 1 resource bases in shale,” analysts at Wells Fargo said in a note. With a deal premium of 15% along with the projected efficiencies, Conoco “seems to be getting a bargain.”