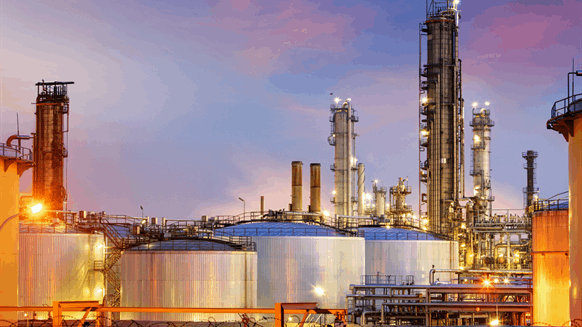 Returns at sophisticated refinery units that companies built at great expense are now almost on a par with those at relatively inexpensive and simple plants.

(Bloomberg) - Returns at sophisticated refinery units that companies built at great expense are now almost on a par with those at relatively inexpensive and simple plants.

In Asia, facilities with the ability to produce more gasoline and less heavy fuel -- the typically sulfurous and viscous products used in ships and power plants -- were suffering last month with lower margins than plants that don’t have such technology. The unusual shift in fortunes was spurred by shrinking profits from converting dirty residual oil into cleaner light fuel via a process known as cracking.

As with almost every change in the oil market these days, the U.S. shale boom had a role to play. American production that’s typically less dense and sulfurous has contributed to the crude slate at refineries globally turning lighter. That’s in turn led to a rise in cleaner fuel output and a gasoline glut, just as more firms invest in technology to eliminate dirty-product production before new and more stringent standards for shipping fuel apply from 2020.

Profits from cracking in Singapore, a major refining hub in Asia, went below that of a simpler distillation process such as topping in the beginning of November. This phenomenon occurred for the first time in at least 10 years for Saudi Arabia’s Arab Light crude, data compiled by Bloomberg show. The shift is likely to be fleeting as the use and value of residual fuel are poised to collapse when ships switch to burning cleaner supply such as gasoil.

Asia fuel oil margins have surged to a profit of more than $4 a barrel against benchmark Dubai crude versus a $7.40-loss in a span of seven months, while the so-called gasoline crack spread slipped to negative in early-November for the first time since 2011. Returns from producing gasoil has also plummeted about 37 percent since early-November, falling to its lowest level this year at a time when it typically peaks due to heating demand during winter.