China Tensions Risk $52B in US Energy Sales 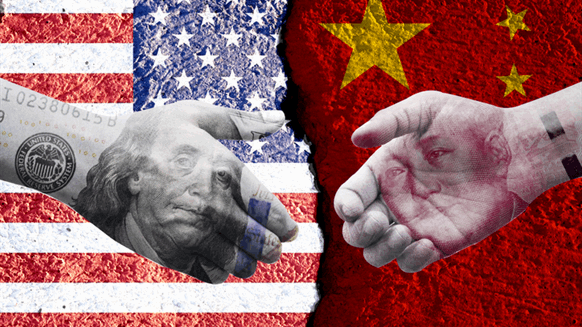 China is already lagging behind its promise to buy $52 billion worth of U.S. oil, gas and other energy products.

(Bloomberg) -- China is already lagging behind its promise to buy $52 billion worth of U.S. oil, gas and other energy products, and analysts warn that rising tensions between Washington and Beijing jeopardize additional sales.

Data tracking trade in March and April indicate “China could be well short of its purchasing obligations for politically important agriculture products and energy goods,” ClearView Energy Partners LLC said in a research note to clients late Wednesday. “President Trump might see more political upside in scapegoating China for the spread of Covid-19 than preserving the compact.”

Under the Phase One trade deal inked in January, China agreed to buy an extra $18.5 billion of U.S. crude oil, coal and other energy products this year, with purchases increasing to $33.9 billion in 2021. However, China Customs data analyzed by ClearView show that for the 12-month period ending in April, the country imported only $3.6 billion in coal, oil, petroleum coke and other energy products from the U.S.

Those sales took place before intensifying U.S.-China friction stoked by the coronavirus pandemic.

The U.S. just added 33 Chinese entities to a trade blacklist and declared Hong Kong no longer warrants special treatment under American law. Now, lawmakers are pushing President Donald Trump to hit China with sanctions in response to its tightening grip on Hong Kong and human-rights abuses. And China, in turn, has warned it would retaliate if the U.S. puts sanctions on the country or interferes in its affairs.

The White House has signaled possible trade disruptions too. “The China Phase One trade deal does continue to go on for the moment and we may be making progress there,” said National Economic Council director Larry Kudlow during a CNBC interview on Thursday. “But I think their moves on Hong Kong are a very, very big mistake.”

Oil industry leaders were already worried Beijing was falling behind in its U.S. energy purchases. Some even urged Trump to allow part of China’s purchase pledge to be fulfilled by entering into long-term contracts to buy U.S. liquefied natural gas, though it would take years for those deals to pay off with actual gas deliveries.

Now, industry leaders are concerned a tit-for-tat between the U.S. and China puts more potential transactions at risk.

“We urge the administration to continue to engage diplomatically with China and avoid an escalation in trade tensions, which could imperil our nation’s economic recovery and long-term energy security,” American Petroleum Institute spokesman Scott Lauermann said by email.

“We are all committed to working together to find practical solutions and reasonable compromises to ensure that China is held to their Phase I energy trade commitments for both crude and natural gas,” Bradbury said by email.

To contact the editors responsible for this story:
Jon Morgan at jmorgan97@bloomberg.net
Elizabeth Wasserman, Ros Krasny