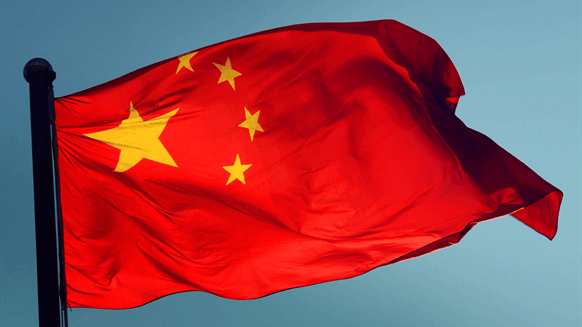 China's imports of liquefied natural gas are poised to drop for the first time in more than three years as buyers grapple with an outage at a key receiving terminal and hefty stockpiles.

(Bloomberg) -- China’s imports of liquefied natural gas are poised to drop for the first time in more than three years as buyers grapple with an outage at a key receiving terminal and hefty stockpiles.

The world’s top buyer of natural gas imported 3.8 million tons of the fuel in LNG form Oct. 1-30, according to berth data compiled by Bloomberg, compared with 4.6 million for the full month last year. If confirmed by official customs data, which will be published later this month, it would be the first year-over-year drop since July 2016.

The slide can be partially attributed to an outage at the Rudong LNG terminal, which has been shut since late September after it was damaged during a typhoon. No LNG tankers arrived at Rudong last month, according to the berth data, compared with vessels carrying about 727,000 tons in October 2018. A milder summer also left buyers in China with larger-than-normal stockpiles leading into the winter demand season, which slowed purchases for October-arrival cargoes.

Global LNG sellers have hung their hopes on China as demand in stalwart markets such as Japan and South Korea is expected to be steady or declining. Chinese companies imported 53.8 million tons of LNG in 2018, a nearly three-fold increase since 2015. The country has imported 47.2 million tons this year through Oct. 30, up 14% from 2018, according to berth data.

The October trend was noted earlier Friday in a note by Eurasia Group analyst Henning Gloystein.

To contact the editors responsible for this story:
Ramsey Al-Rikabi at ralrikabi@bloomberg.net
Dan Murtaugh