Cheap Gasoline Forcing US Refiners to Throttle Back 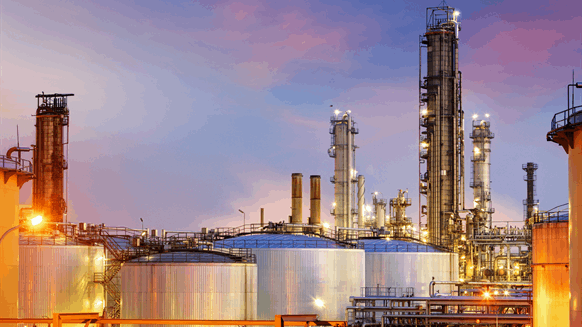 The refiners are struggling mightily, due to the steep drop in demand.

(Bloomberg) -- Oil refiners across the U.S. are being forced to throttle back operations amid a historic plunge in gasoline demand and prices.

Plants representing more than 10% of U.S. fuel-making capacity have cut back. Exxon Mobil Corp. has slowed rates at facilities in Texas and Louisiana, while others around Los Angeles and Philadelphia are taking similar action to stem a growing glut of gasoline, diesel and jet fuel. Phillips 66 said Tuesday many of its refineries are processing minimum amounts of crude.

Refiners are acutely exposed to the financial impact of the spreading coronavirus. Orders to shelter at home are grounding flights and keeping drivers off the roads, crushing fuel demand and profit margins. Companies delayed planned maintenance to stem the outbreak, adding to the fuel glut, and now are left with little choice but to slow down.

“The refiners are struggling mightily, due to the steep drop in demand,” said John Kilduff, a partner at Again Capital LLC, a New York hedge fund focused on energy. “The poor refining margins will push companies to reduce operating rates further.”

Refineries representing over 1.5 million barrels a day of crude processing have delayed maintenance, according to people familiar with the situation. This only exacerbates a growing fuel glut that may further pressure profit margins.

Global demand is plunging, with some traders seeing it falling as much as 10 million to 20 million barrels a day at some points this year. California’s lock-down will decimate consumption in a state that accounts for about 10% of U.S. transportation fuel demand.

Gasoline futures in New York slid Monday to 41 cents a gallon, the lowest level since 1999, and traded at 48.73 cents on Tuesday at 11:09 a.m. In the Chicago wholesale market, prices were 15 cents on Monday, the lowest in data compiled by Bloomberg going back to 1992. In Europe, prices fell 20% and Exxon said it’s cutting back rates at two refineries in France.

Refiners are feeling the pain, with an index of U.S. refiners falling by two-thirds this year. Profit margins to produce gasoline have dropped below zero for the first time since December 2008, during the last recession.

“Well, demand is probably down more than 30%, so we as an industry need to run 30% less,” said Ezra Uzi Yemin, CEO of refiner Delek US Holdings Inc. “I imagine many of us already run at reduced rate because we can’t sell all the fuel.”

Some U.S. oil refiners, concerned they won’t be able to offload stockpiles of winter-grade gasoline and drain the system in time, are asking the Environmental Protection Agency to waive a June 1 deadline to shift to cleaner-burning summer-grade fuel.

One big problem -- there isn’t that much room to store the gasoline and other fuel being produced every day with stockpiles in the U.S. already at the highest seasonal level since 2017. Traders are hunting for any place to store fuel, according to Buckeye Partners LP.

Monroe Energy LLC’s Trainer refinery near Philadelphia cut rates by 40,000 barrels a day and Exxon’s Baton Rouge site reduced by just over 60,000 barrels, while Valero Energy Corp. may also cut back at some of its sites this week because of weakening demand for gasoline, according to people familiar with the matter.

Suncor Energy Inc. said late Monday it was beginning to adjust refinery utilization and pushed back its Syncrude turnaround to the third quarter from the second quarter. Phillips 66 said it’s deferring three “sizable” turnarounds to 2021.

Even an oil price war between Saudi Arabia and Russia, which has unleashed a flood of cheap crude across the world, hasn’t helped. As fast as crude prices have fallen, refined products have plunged faster.

“It is telling that the refining margins are so poor with crude oil prices this low,” Kilduff said. “Usually, cheap crude oil makes for a terrific operating environment for refiners.”

--With assistance from Jennifer A. Dlouhy, Javier Blas and Jeffrey Bair.

To contact the reporters on this story:
Jessica Summers in New York at jsummers24@bloomberg.net;
Barbara Powell in Houston at bpowell4@bloomberg.net