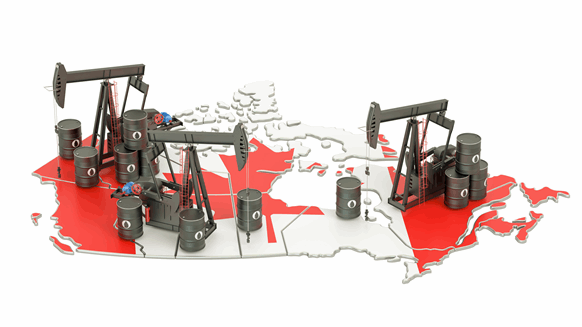 It's a bad sign for industries already struggling to attract capital.

(Bloomberg) -- Canadian resource companies are choosing to invest abroad at record levels, amid waning global interest in the nation’s energy and mining assets.

Statistics Canada reported Thursday that Canadian-based energy and mining companies invested a net C$15.5 billion ($11.5 billion) outside of the country in the first three months of 2019. The exodus of Canadian capital from the sector in the quarter was almost double the previous quarterly record.

It’s a bad sign for industries already struggling to attract capital. The data suggests that Canadian-based resource companies -- who have refrained from large foreign investments in recent years -- may now be seeking alternatives outside of Canada.

Investment into Canada’s energy and mining sector from abroad was just C$123 million in the first quarter of 2019, bringing the sum of the last four quarters to C$2.8 billion.

Foreign direct investment into Canadian resource companies has essentially collapsed since oil prices began dropping at the end of 2014. Before that period investment from abroad peaked in 2013 at C$22 billion that year.

For all industries, foreign direct investment in the first quarter fell to C$12.9 billion from C$17.6 billion in the final three months of 2018.

Manufacturing was an outlier, with that sector showing a sharp increase in investment from abroad last quarter.

To contact the reporter on this story:
Erik Hertzberg in Ottawa at eschmitzhert@bloomberg.net