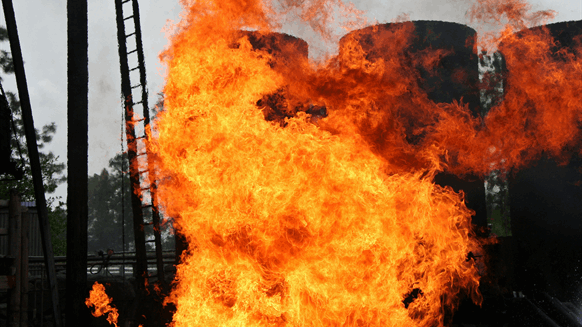 A fire at a San Francisco-area fuel terminal is contained after spewing black smoke high in the air, snarling rush-hour traffic and prompting officials to ask residents to take shelter.

(Bloomberg) -- A fire at a San Francisco-area fuel terminal is contained after spewing black smoke high in the air, snarling rush-hour traffic and prompting officials to ask residents to take shelter.

Authorities are working to assess any health threat from the fire that affected two tanks at NuStar Energy LP’s Selby Terminal in Crockett, about 25 miles (40 kilometers) northeast of San Francisco, the Contra Costa Country fire department said on Twitter. The tanks held “very low volumes of ethanol” comprising less than 1% of their capacity, NuStar said.

All operations have been suspended, and product shipments in and out of the facility are halted. All personnel are safe, the company said.

An order for residents to remain indoors has been lifted for all areas affected areas near the NuStar facility, the Contra Costa County health department said in a tweet. Since there is no longer any imminent danger to the public, a section of Interstate 80 near the terminal that had been closed in both directions has now re-opened, the California Highway Patrol said in a tweet.

The blaze came less than a day after an earthquake forced Marathon Petroleum Corp. to shut units at its nearby Martinez refinery, threatening to push up gasoline prices that had just eased from the highest level in seven years. Disruptions at California refineries sent retail pump prices in the state well above $4 a gallon.

The fire involved two tanks. Three others, holding ethanol and jet fuel, were threatened and being doused with water, Steve Hill, a spokesman for the Contra Costa Fire Protection District, said in a televised press conference. He corrected an earlier statement saying three tanks were burning.

The two burned tanks contained a combined 250,000 gallons of ethanol. The blaze spread to 15 acres of nearby vegetation, a brush fire that was put out, Hill said. Between 12 and 20 nearby residents were evacuated.

The incident also comes a week after the state’s utility PG&E Corp. shut power to 738,000 homes and businesses to prevent wildfires similar to those that devastated the state last year, causing dozens of fatalities.

Phillips 66’s Rodeo refinery wasn’t affected by the blaze, the company said in a tweet. Some early initial reports indicated the fire was at the refinery, located close to the NuStar terminal.

NuStar operates about 9,800 miles of pipeline and 74 terminal and storage facilities that store and distribute crude oil, refined products and specialty liquids. Its San Francisco-area facility has a capacity of about 3 million barrels of gasoline, diesel, jet fuel and ethanol, according to the company’s website.

To contact the reporters on this story:
Robert Tuttle in Calgary at rtuttle@bloomberg.net;
Jeffrey Bair in Houston at jbair4@bloomberg.net

To contact the editors responsible for this story:
David Marino at dmarino4@bloomberg.net
Joe Ryan, Christine Buurma