Buyers of Venezuelan Oil Need to Go to Panama City 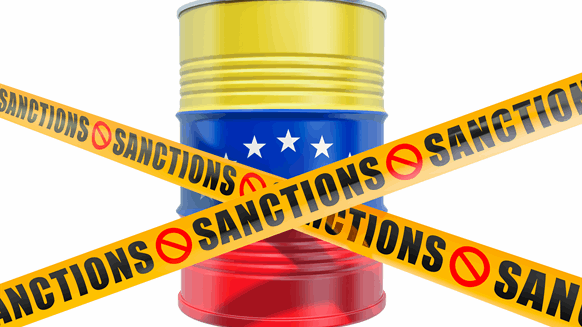 Buyers of Venezuelan crude used to visit the building across from Petroleos de Venezuela SA's headquarters in Caracas. Not anymore.

(Bloomberg) -- Buyers of Venezuelan crude used to visit the building across from Petroleos de Venezuela SA’s headquarters in Caracas. Not anymore.

Now, the place to go is a helix-shaped skyscraper popularly known as “The Screw,” in Panama City that houses a Rosneft Oil Co PJSC office, according to people with knowledge of the situation. The office, staffed by three oil traders, two of whom used to work for PDVSA, helped Rosneft to handle 70% of all oil exported by Venezuela in August, data compiled by Bloomberg show.

Rosneft has taken on a more active role in trading Venezuelan oil after the U.S. tightened sanctions earlier this year against the South American nation in a bid to oust President Nicolas Maduro. As China National Petroleum Corp.’s subsidiary PetroChina Co. Ltd., the biggest taker of Venezuelan crude prior to sanctions, halted loadings in August and September, Rosneft was allocated larger shares of Venezuelan crude, and so has Cuba and PDVSA’s subsidiary Nynas AB, which owns refineries in Europe.

PDVSA and Rosneft have been partners in oil-producing ventures in Venezuela and since 2014 Rosneft has loaned about $6.5 billion to PDVSA in exchange for oil. After initial delays, PDVSA caught up with payments and reduced the outstanding debt to $1.1 billion in the second quarter. The crude loaded as payment is being resold to refiners in China and India. Rosneft-backed Nayara Energy Ltd., based in Mumbai, has adjusted its diet and is taking more Venezuelan barrels.

PDVSA’s trading department now is staffed with employees brought in from the Housing Ministry, the former home of now oil minister and PDVSA president Manuel Quevedo, some of the people said. Complaints include that most PDVSA traders don’t speak English, the language of oil business worldwide, and many struggle with common-place concepts such as arbitrage and freight rates. Another common complaint is that most phone calls and emails go unanswered, some of the people said.

In a Sept. 10 statement, Rosneft said it’s following the law because all oil contracts, including the ones of loading crude oil or delivering gasoline, were signed prior to sanctions. Threats of imposing sanctions on Rosneft while the U.S. allows American companies to operate with PDVSA under waivers can be seen as “unfair competition aimed at gaining advantages by American companies in the global oil market,” the Moscow-based company said.

To contact the editors responsible for this story:
David Marino at dmarino4@bloomberg.net
Jessica Summers, Catherine Traywick