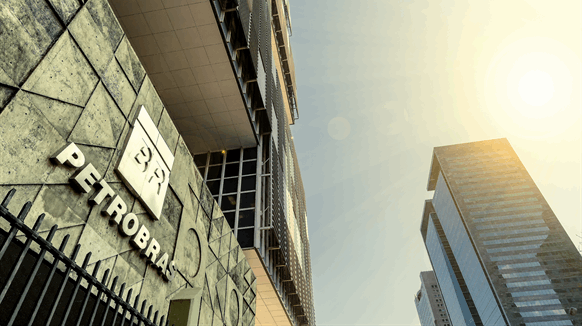 State-controlled Petrobras did most of the bidding while other major oil companies stayed away.

(Bloomberg) -- Brazil’s largest-ever auction of oil deposits flopped, sending the real tumbling, after state-controlled Petroleo Brasileiro SA did most of the bidding while other major oil companies stayed away.

Petrobras, as the company is known, joined with China’s Cnooc Ltd. and China National Oil & Gas Exploration & Development Co. in submitting the winning bid for the giant Buzios field, the prize of the auction. Petrobras was the sole bidder for the Itapu block, and offered minimum amounts for both. Two others, Sepia and Atapu, received no bids. Exxon Mobil Corp. and other oil majors didn’t make any bids.

The Brazilian real fell against the dollar as the outcome diminished expectations for how much of the U.S. currency will flow into the country to develop the massive offshore oilfields. Petrobras shares also initially slumped more than 5 percent -- the company holds a 90 percent stake in the winning Buzios group, meaning it will need to spend more than initially anticipated to develop the block.

“Total disaster is the best way to describe this morning’s round,” said Ross Lubetkin, chief executive officer at Welligence Energy Analytics, a consultancy. “Not one major participating is a glaring failure. Meanwhile, the failure to license Sepia and Atapu means the government misses out on $9 billion in signature bonuses.”

The auction was meant to be part of Brazil’s shift away from nationalistic oil policies and help it shake off some of the toughest years in the country’s history, after a wide-ranging corruption probe was followed by a devastating recession in 2015 and 2016. With the economy still struggling to grow, Brazil was looking to the sale to inject some badly needed cash into public coffers.

With estimated total reserves of 20 billion barrels of oil, the areas being auctioned were expected to raise about $25 billion in government fees and another $25 billion in compensation for Petrobras, which has already invested in drilling and platforms.

But the multibillion-dollar offering came at a time when oil producers are under mounting pressure from shareholders to show capital discipline, and their stocks have been falling since crude prices tumbled in late April.

With the days of oil at $100 a barrel far in the rear view mirror, oil majors have been more strict in deploying capital and are no longer looking to expand proven reserves at any cost. While the Brazilian fields on offer Wednesday were a unique opportunity to get access to discovered resources, the high signing bonuses and uncertainty about compensation payments to Petrobras curbed interest.

Brazilian officials said the almost 70 billion reais ($17 billion) in licensing fees from the two auction blocks that were awarded still amount to the largest ever collected by a government. But the compensation to Petrobras will fall to only a fraction of $25 billion, because its partners in Buzios hold just a 10 percent stake in the venture. The exact amount isn’t known yet.

The auction was still a huge event for Brazil, oil regulator Decio Oddone said at a Rio press conference following the auction announcement. Energy Minister Bento Albuquerque called it a success and said it shows Brazil is on the right path. He added that the country will offer the two fields that went unsold again next year.

Rudolf Huber  |  November 07, 2019
In a time hen shale is cheaper to develop and so much faster to turn around and offshore deepwater is so expensive, why look at anything but shale? This is the conundrum all expensive oil sources have. Look at Arctic oil and gas. Russia is sitting on a bunch of them and I bet that those they develop right now on Yamal don't make their investments back. The others in the Kara Sea, in the Barents Sea and further out are essentially stranded. Huge and juicy if only they could be developed economically. It's like Titan - the Saturnian moon. There is LNG on the surface in ready-made oceans. It would be a fortune if it could be brought to Earth economically. But it can't. We need to get chummy with the notion of stranded oil and gas. Jut because its there does not mean it's worth anything.
RELATED COMPANIES
Company: Petrobras more info
Company: CNOOC more info