Beware of the Dip: Oil Prices Could Go Lower 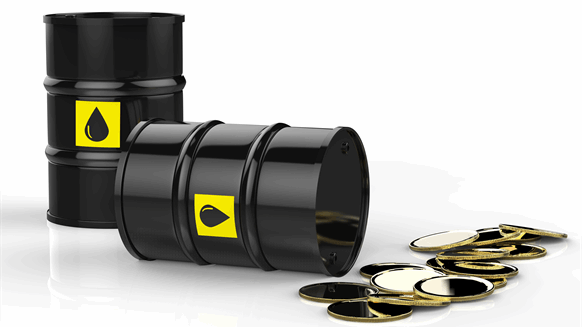 Without high geopolitical risk or an actual supply reduction, oil prices have a downside risk.

The spike in oil prices since August provides U.S. producers an attractive opportunity to hedge their 2018 capital program. With a typical lag, it will likely result in an acceleration in U.S. oil production growth starting 2Q18. Coupled with a seasonal dip in global demand in 1Q18, which will cause sizable excess oil inventories to increase, a correction in oil prices is likely. Surplus oil inventories are likely to remain through 2018, taking the steam out of the recent upward momentum in prices without an actual supply disruption. Inventories will still be above the 5-year average in 4Q18, but smaller.

WTI is $58/bbl in response to increased geopolitical anxiety, up from an average of $49.33/bbl for the first 9 months in 2017. Without high geopolitical risk or an actual supply reduction, oil prices have a downside risk. Fundamentals alone suggest an average near $53/bbl over the next 12 months until greater clarity emerges, with a varying geopolitical risk premium additive.

Brent is near $64/bbl, selling at a premium around $5.50/bbl over WTI, down from over $7/bbl in September. The wide spread encourages U.S. exports and discourages imports. Through August, the 2017 Brent premium over WTI was $2.01/bbl. The Brent premium will likely continue to contract in the coming months.

Oil prices and the Brent premium widened dramatically in the aftermath of seasonal maintenance in the North Sea, hurricane season, the Kurdish vote for independence, the threat of increased militant activity in Nigeria, Venezuela’s bankruptcy, the Saudi crackdown on corruption in the Kingdom, and increased tension between Saudi Arabia and Iran. Then, a recent spill temporarily closed the Keystone pipeline diminishing supplies into Cushing OK, the NYMEX pricing point, driving WTI higher.

Venezuela’s worsening economic and political crisis is speeding a decline in production which will likely continue for some time. October production of 1.86 MMBD (million bbl per day) was down 257 MBD (thousand bbl per day) Y/Y. A similar, if not greater, decline is anticipated in 2018. It will likely continue to decline in 2019 and beyond due to extensive deterioration in equipment and the loss of skilled labor. Little, if any, investment is being made in Venezuela upstream.

Total October OPEC production was 32.53 MMbpd, down 817 MBD from 4Q16. The recovery in Libya and Nigeria, who were exempted from the OPEC agreement to cut from Jan. 1, added a combined 670 MBD since 4Q16, offsetting over half the impact of the cut by other producers. Other OPEC compliance with the agreement remains high. Expectations the cut will be extended to the end of 2018 from an end of March expiration is widespread. OPEC is scheduled to meet in Vienna Nov. 30.

Without an actual geopolitical supply disruption, latest fundamentals indicate surplus oil inventories will remain high through 2018. This assumes OPEC production remains near October levels adjusted for a steady decline in Venezuela. A 200 MBD Y/Y decline in total OPEC production in 4Q18 is indicated.

U.S. producers are poised to accelerate production growth in 2018. Latest data indicates U.S. liquids production will average 13.24 MMbpd in 4Q17, up 940 MBD Y/Y. A preliminary estimate indicates even faster growth over the next 12 months, up by 1.32 MMbpd to reach 14.56 MMbpd in 4Q18, maybe more. The outlook will become more definitive in coming weeks after 2018 capital budgets are announced.

Outside of the United States, the outlook for production growth is also improved. The major oils, who operate globally, have also adjusted to a world of $50 oil. BP plc is able to breakeven at $49/bbl and is guiding toward cash breakeven at $35-40/bbl in 2021. Exxon Mobil Corp. plans to increase its 2018 capital spending by 18 percent.

Latest estimates indicate a 510 MBD increase in other non-OPEC by 4Q18. Growth in Canada, Brazil and Kazakhstan is partly offset by declines in Mexico, China and Azerbaijan.

Since 2015, global oil demand has grown about 5 MMbpd, twice as fast as the previous 3 years, supported by strong global economic growth, particularly in the OECD. In 4Q17, it will be up 1.44 MMbpd Y/Y to 98.2 MMbpd, which is well above trend-line.

The latest IEA estimate anticipates a 600 MBD seasonal dip in demand in 1Q18. It is then projected to increase to 99.90 MMbpd in 4Q18, up 1.66 MMbpd Y/Y. China, India and Africa lead the expansion.

Beyond 2018, the risk of an oil shortage remains. In a shortage, an oil price spike over $100/bbl would not be surprising.

For an in depth analysis, contact Paul Kuklinski at bostonenergyresearch@msn.com.

Paul Kuklinski has selected equity investments in the energy sector for major institutional investors for over 30 years. In his experience, the future price of oil is the dominant investment variable.

He founded Boston Energy Research in 1992 to provide independent research to large financial institutions. He was previously a Partner at Cowen & Company and a founding Partner of Harvard Management Company, which in the 1970s built a weighting over 50% in the energy sector in the Harvard Endowment equity portfolio.