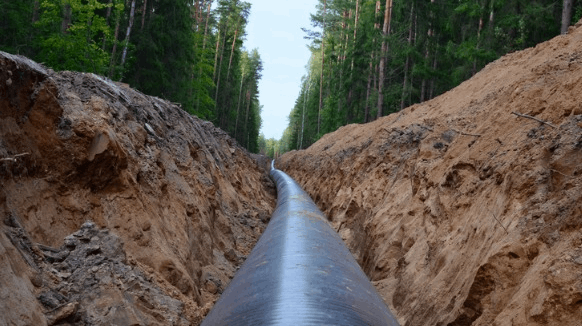 It's getting harder to build pipelines and other infrastructure in left-leaning states.

(Bloomberg) -- One of the largest utilities in America is starting to turn its back on natural gas.

The moves come as utilities face increasing pressure from local governments, investors and environmentalists to quit fossil fuels. While long heralded as a cleaner alternative to coal and heating oil, gas is drawing stiff oppositions from left-leaning state lawmakers, making it increasingly difficult to build pipelines and other infrastructure.

“Until these issues are resolved, the ability to satisfy the country’s energy needs will be significantly challenged,” Dominion Chief Executive Officer Thomas Farrell said on a call with analysts. “This trend, so deeply concerning for our country’s economic growth and energy security, is a new reality.”

Shares of Dominion, which also announced it’s cutting its dividend, fell 11% Monday, the most in more than three months. The company is taking $2.7 billion to $3.2 billion in pre-tax charges related to the canceled pipeline, it said in a filing.

The push away from gas positions Dominion as more of a pure-play state-regulated utility at a time when oil and pipeline operators have lagged the broader market. In the last year, an index of pipeline companies has fallen 36%, while the S&P 500 Index has gained 4.7%.

“Given the bend towards decarbonization efforts in the country, the move away from natural gas, and investor demand for more simplified utility structures, we believe this is absolutely the correct move for Dominion to make,” Guggenheim analysts led by Shahriar Pourreza said in a research note.

To be clear, Richmond, Virginia-based Dominion, which provides power and gas to seven million customers in 20 states, isn’t walking away from the fossil fuel altogether. It will still sell gas to customers for heating and cooking. It’s retaining an interest in its Cove Point liquefied natural gas export terminal in Maryland. And 40% of the electricity the company generates comes from plants fueled by gas, coal and oil, according to its website.

“They’ll still be burning lots of gas for decades ahead in the core utility business,” Bloomberg Intelligence analyst Kit Konolige said in an email.

But pressure is mounting. Virginia enacted a law in April requiring Dominion’s utility in the state to be carbon-free by 2045.

“Dominion’s unsurprising shutdown of the troubled Atlantic Coast Pipeline project and $4 billion sale of midstream properties take pressure off the strained balance sheet. In combination with a dividend cut, the steps shift Dominion to an almost all-utility growth story.”

Atlantic Coast is the third U.S. gas pipeline project to scrapped or shelved this year. Williams Cos. opted not to reapply for a permit in May for a $1 billion pipeline extension after regulators in New York blocked it. And in February the Oklahoma-based company canceled plans for a pipeline that would have run from Appalachia to New York.

While the Atlantic Coast pipeline project won a key victory last month when the U.S. Supreme Court sided against environmentalists and upheld a crucial permit, the project still faced formidable opposition and costs. “That would indicate that that wasn’t a strategic decision as much it was as a practical decision,” said Paul Patterson, an analyst at Glenrock Associates LLC.

Dominion’s deal with Berkshire calls for the giant conglomerate to assume $5.7 billion in debt. The utility will use $3 billion of the proceeds to buy back shares. Dominion cut its projected 2021 dividend payment to around $2.50 a share, reflecting the assets being divested and a new payout ratio that aligns it better with industry peers.

The transaction is expected to close during the fourth quarter. It will require the approval of federal agencies including the U.S. Department of Energy.

Berkshire is amassing more than 7,700 miles (12,400 kilometers) of natural gas storage and transmission pipelines and about 900 billion cubic feet of gas storage in the deal with Dominion. Warren Buffett’s conglomerate will also acquire 25% of Cove Point. With this transaction, Buffett has ended his period of relative silence on the acquisition front since the pandemic.

The Dominion deal is set to be Berkshire’s largest acquisition ranked by enterprise value since its purchase of Precision Castparts Corp. in 2016. It will expand the company’s already sprawling empire of energy operations, which currently has operations in states including Nevada and Iowa.

To contact the editors responsible for this story:
Joe Ryan at jryan173@bloomberg.net
Carlos Caminada