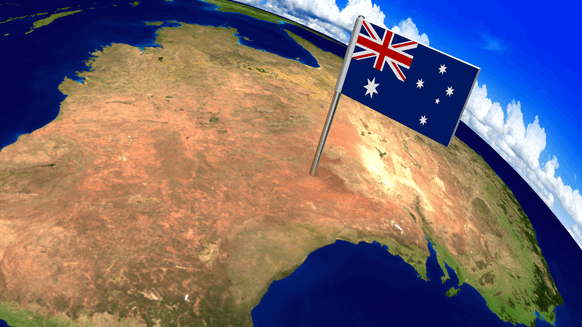 (Bloomberg) -- Opening up a potentially huge shale gas region in Australia’s Northern Territory would increase the country’s already-hefty greenhouse gas emissions making it a “particularly dangerous” contributor to climate change, according to a new study.

The report, commissioned by environmental lobby group Lock The Gate, tested a range of scenarios for development of the McArthur Basin and Beetaloo sub-basin, which are located about 500 kilometers (311 miles) southeast of Darwin and estimated to contain roughly 500 trillion cubic feet of gas. Gas extraction would add about 20% or 75% to Australia’s total emissions, the study found, based on high and low production estimates for the region provided by industry to the NT Fracking Inquiry.

Oil and gas industry body APPEA said the study over-estimated potential gas production by at least 10 times what was envisaged by the industry: “If we were to export that much gas we would need 50 LNG plants in Darwin,” said Keld Knudsen, APPEA’s Northern Territory Director. The “alarming and unrealistic” scenarios were distorting public discussion on resource development in the region, he added.

Origin Energy Ltd and Santos Ltd. both have approval to drill exploration wells in the region this year after the territorial government lifted a ban on fracking -- the process of extracting oil and gas from layers of shale rock deep underground.

Producing gas from shale “inevitably involves fugitive emissions of methane, which has a much greater capacity to increase global warming than carbon dioxide in the short term,” Ian Lowe, the study’s author and former president of the Australian Conservation Foundation, said in his introduction.

Lowe, an emeritus professor at the School of Environment & Science at Griffith University, made his calculations based on the Australian government’s guidelines for greenhouse gas emissions. Those provide values for direct emissions from various forms of natural gas, but he acknowledged the difficulty in assessing the scale of methane leaked from fracking. He mapped methane emissions based on estimated leakage that ranged from 1.7% to 7.7%.

The Australian government has said it will meet its Paris Agreement target to reduce carbon emissions by at least 26% by 2030 compared to 2005 levels, but has no clear policy agenda to get there. The country’s emissions have been rising in recent years as a number of large liquefied natural gas export projects started operation.

To contact the reporter on this story:
James Thornhill in Sydney at jthornhill3@bloomberg.net

To contact the editors responsible for this story:
Ramsey Al-Rikabi at ralrikabi@bloomberg.net
Aaron Clark

Mark  |  October 29, 2019
Another boatload of you-know-what courtesy of radical leftists. After 5 decades of misleading claims, false predictions, and alarmist propaganda, they have to be near empty on the credibility meter.