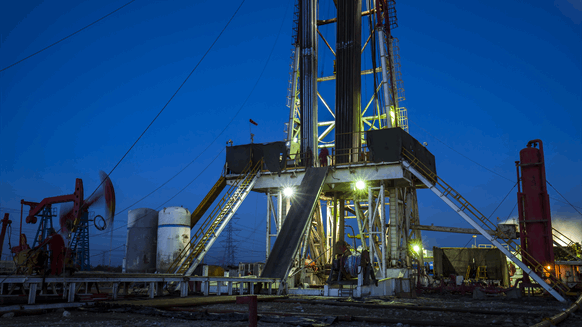 The company posted a roughly $3B writedown on its Alpine High project, a find from 2016 that fizzled when it turned out to hold more gas than oil.

(Bloomberg) -- Apache Corp. is officially calling it quits on a highly publicized but disappointing shale discovery in West Texas after vehemently defending the play’s prospects for about three years.

The Houston-based company posted a roughly $3 billion writedown on its Alpine High project, a find from 2016 that fizzled when it turned out to hold more natural gas than oil. Apache will instead focus on offshore riches in Suriname, where the explorer recently struck crude and enlisted French oil titan Total SA as a partner.

The discovery was announced in September 2016 to much fanfare and claims the field held 3 billion barrels of crude and 75 trillion cubic feet of gas. But it quickly became apparent that that corner of the prolific Permian Basin was far richer in natural gas and its byproducts than more-valuable oil. The Alpine High became even more worrisome for investors as gas supplies in the region ballooned and prices cratered.

Until recently, Apache executives defended the Alpine High, saying in May that investors didn’t yet “have an appreciation for the potential cash flow generation from the liquids play at Alpine High.”

But roughly five months later, the star Apache geologist who led discovery of the field abruptly left. At the time, the departure of Steven Keenan, Apache’s senior vice president of worldwide exploration, raised red flags for the company’s other high-profile prospect -- offshore Suriname.

Apache calmed investors who were nervous Suriname would be a bust last month when it disclosed a major discovery. The announcement came shortly after Apache brought Total aboard to help develop the project on Suriname’s Block 58.

“We are currently drilling the second well on Block 58, Sapakara West-1, and are encouraged by what we’ve seen so far,” Apache CEO John Christmann said Wednesday in a fourth-quarter earnings statement.

The company will now shift its capital spending to focus on Suriname rather than on “near-term growth opportunities,” Christmann said. Altus Midstream, meanwhile, will look for new customers to fill its pipes.

Kenny Goh  |  February 29, 2020
Just look at the amount of total money paid by Total to Apache for the farm-in and the results of the discovery. 82m or ~270 ft of sweet oil and good quality Tubidite sands. These are the same sequence as Exxon 5-7 billlion oil reserves across the border in Guyana. High quality turdite sands with hydrocarbons once calibrated with a discovery well with that thickness, it is easy to estimate the oil reserves with 3D seismic data and exploration success is like “shooting fish in a barrel”
John Ford  |  February 28, 2020
"Star Geologist". Ha! Apache is finally moving in the right direction by funding proper areas of their impressive conventional portfolio. They will do well in Suriname and the results will be exciting to see in the coming months.
Bill Flaherty  |  February 27, 2020
Just like their 5 billion barrels in the Bakken in Western Montana. Lies and more lies. Reporting in BOE - 7000 BOE is a 42 million cubic foot gas well. Apache Execs - STOP Lying.
RELATED COMPANIES
Company: Apache Corp. more info