Amid Oil Rout, Challenge Is Picking Which Wells Close 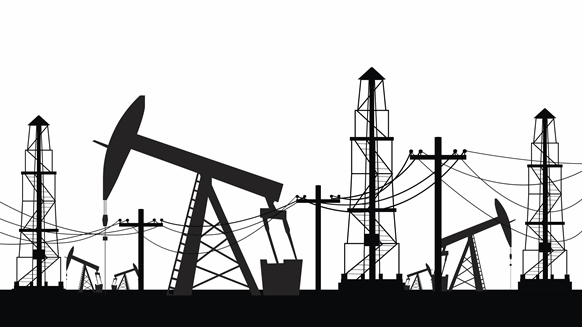 Figuring out which wells to shut, and for how long, is the hard part.

(Bloomberg) -- Turns out shutting an oil well is easy, in many cases it can be done with a few taps on an iPhone. Figuring out which to shut, and for how long, is the hard part.

In the wake of a killer pandemic and the worst crude crash in history, the U.S. has become ground zero for a vast new experiment in the industry. Producers are shutting wells at a tremendous rate with oil prices sitting at historic lows. On Friday, Exxon Mobil Corp. said it will cut the number of its rigs in the Permian Basin by 75%, running just 15 by year’s end. Chevron Corp. said it’s now down to just five rigs there, a 71% drop.

It’s a fetal-position strategy that could put a fifth of global crude production on the line.

“The industry’s never faced shut-ins like we’re facing right now,” said Clay Williams, chief executive officer for National Oilwell Varco Inc., the biggest U.S. maker of oilfield gear, on an April 28 call with investors. “We are on the precipice of forced well shut-ins totaling 15 to 20 million barrels of oil per day.”

Companies are deciding everything from which wells should be shut first to which should be closed for good, what the costs are, how easy it will be to restart them, and what fields may be too porous to handle a shutdown if you ease operations across hundreds, or even thousands, of wells at once.

Curtailing the output from wells is relatively straightforward. The system of choice today for new wells in the shale patch involves the use of electric submersible pumps, or ESPs, that act as surveillance systems to organize and store data in a centralized location for monitoring and control. They send data from deep within the well to a remote telemetry unit on the surface that transmits it online to production managers.

The goal of these devices is to prevent operating problems from afar before they lead to costly failures. At the same time, these systems allow managers to easily shut down a well as needed.

It’s common practice to shut a well for a month or so while a fracking job is going on in a well nearby, according to Richard Spears, a 40-year veteran of the oil patch and vice president at Spears & Associates, a Tulsa-based industry consultant.

“You’ll be surprised perhaps how simple and non-eventful starting and stopping a shale well is,” Spears said by telephone. “In this world of automated operations, this can often be performed using an iPhone from a production manager’s spare bedroom where he might be working.”

Exxon Chief Executive Officer Darren Woods on Friday said the company will cut back on its newest, most prolific wells first. That essentially allows Exxon to store oil in the ground until prices rise.

“You’re better off deferring that high production rate into a period with better pricing,” Woods said on an investor call. “Depending on how the the market evolves we’ve got the flexibility to bring a lot of those wells back on quickly.”

Generally, non-automated wells can be shut pretty easily as well, something that happens regularly for maintenance. To repair a well requires a service rig and crew to come out at about $500 an hour. In some cases, if wells are shut down for a long time, or permanently, companies will want to pull out expensive equipment to make sure it remains viable. That’s an effort that can cost $75,000 or more.

But there are concerns over the potential fallout from long-term shutdowns. Some operators outside the nation’s shale fields worry that as the flow in a well recedes, the porous nature of rocks in their fields could allow oil to migrate away from the well itself.

For many companies, a key data point in deciding which wells to shut is the operating cost per barrel. Oil has traded in New York for less than $20 a barrel since April 16, closing at $19.78 on Friday. A study by BloombergNEF analysts shows that 45% of the production they surveyed is unprofitable at $30 a barrel while conventional, non-fracked wells and high-cost producers in the Bakken basin in Montana and North Dakota need crude to trade above $45 a barrel.