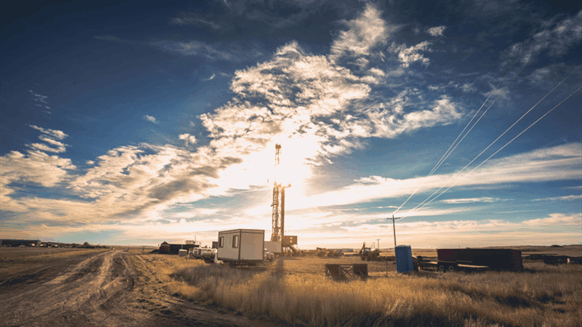 Three years after causing an oil-price crash, the shale boom may not be enough to meet rising global demand.

(Bloomberg) -- Three years after causing an oil-price crash, the shale boom may not be enough to meet rising global demand because the industry has cut back so sharply on higher-risk mega-projects.

Discoveries of new reserves this year were the fewest on record and replaced just 11 percent of what was produced, according to a Dec. 21 report by consultant Rystad Energy. While shale wells are creating a glut now, without more investment in bigger, conventional supply, the world may see output deficits as soon as 2019, according to Canadian producer Suncor Energy Inc.

“Tight rock is not going to solve the global supply-demand issue,” said Adam Waterous, chief executive officer at the Calgary-based Waterous Energy Fund, which invests as much as C$400 million ($265 million). “Its going to take a long time for those mega-projects to come back on.”

Hydraulic-fracturing technology made it possible to squeeze crude from tight-rock formations and turned the U.S. into the world’s top producer. But it also sent the global benchmark for oil tumbling from $115 a barrel in 2014 to less than $55 in October. That’s eroded the incentive for companies to invest billions of dollars on new reserves that take years to develop but can produce for decades.

Oil prices would need to climb to $80 and remain at that level for two years to justify the costly deep-water projects off the coasts of West Africa or Brazil, Waterous said. And even then, it could take a decade before crude from those investments would arrive on the market, he said. Prices topped $66 this week.

For now, producers have set their sights on smaller, less-risky reserves. In 2013, when investment was peaking and prices were comfortably above $90, the industry was starting new projects that typically targeted reserves of 1.1 billion barrels and cost $9 billion each, according to a January report by consultant Wood Mackenzie Ltd. By 2017, projects on average were expected to shrink to 500 million barrels each and cost $3 billion.

The shale revolution “made people much more cognizant of not tying up capital for as long a period of time as in the past,” said John England, head of energy resources at consultant Deloitte LLP in Houston. “The lower-for-longer mentality is evident throughout the industry.”

That’s primarily because fracking of North American shale formations in places like Texas and North Dakota has transformed the industry.

Companies like Royal Dutch Shell Plc and Exxon Mobil Corp. historically invested tens of billions of dollars over many years to develop huge reserves in isolated areas like northern Alberta, Kazakhstan or in the middle of the ocean. Shale is different. A tight-oil well could be drilled within a year for a few million dollars. As prices fell, more companies jumped in with more investment.

Now, shale regions that were barely a blip on world markets a decade ago are expected to pump 7.5 million barrels a day in four years, and output probably won’t peak until after 2025, according to the Organization of Petroleum Exporting Countries. The impact was so significant that the cartel was forced to cut its own supplies to halt the slide in prices.

But as robust as U.S. shale oil has been and will continue to be, those reserves alone face a “daunting task” keeping pace with growing global demand if approvals of conventional projects don’t pick up, the IEA said in a report in September. Earlier this year, researchers at the Massachusetts Institute of Technology said the U.S. government may be overstating future growth in shale output because of flawed assumptions about oil technology.

Of the 10 oil projects sanctioned by companies in 2017 that targeted at least 50 million barrels of reserves, only two -- Repsol SA’s Ca Rong Do Block 07/03 in Vietnam and Exxon’s Liza Phase 1 off Guyana -- were classified as new fields that would produce for the first time, according to data provided by Wood Mackenzie.

Instead, companies said they would try to squeeze more out of the reserves they already have. In Canada, Imperial Oil Ltd. is investing $550 million to expand the capacity of its Kearl oil-sands mine by 9 percent. Chevron Corp. will add 20,000 barrels a day with four wells at its Tahiti platform in the Gulf of Mexico. Off the coast of Norway,  Statoil ASA plans to develop the Bauge oil field, using new “plug-and-play” machinery on the seabed and connecting the well to a platform that’s been in operation for 20 years.

To be sure, things could change in 2018. After more than a year of production limits by OPEC, prices have begun to recover, touching an 30-month high of more than $66 this week, compared with $44 in June. Wood Mackenzie said in a Dec. 15 report that almost 80 percent of projects discussed for 2018 are new ones. The gains are encouraging oil producers to boost capital expenditures by about 4.5 percent in 2018 to $261.6 billion, according to forecasts compiled by Bloomberg Intelligence.

kaushikk  |  December 28, 2017
Shale gas may not meet th e golbal demand but exploration of SHALE GAS By fracturing the earth's inner core gaps , will certyainly lead the world to more disastrous conditions and man made eaeth quakes. Let us not forget the voids which are filed with water and gas, perhaps works as a shock absorber during the plattonic movements or the earth will crash e day .
Kevin J. Williams  |  December 28, 2017
Sorry, but Nope! Shale didn't cause the price crash - OPEC's mindless insistance on "market share" instead of "gross revenues" created most of that. Good to see they've regained sanity, replaced oil ministers, and now the supply vs demand should re-balance in 2018. If/when prices rise over $60-70/bbl, I am 100% confident that shale (in USA and abroad) will be VERY responsive, in less time than these "mega-projects" cited. Plus... an added bonus: Trump's tax-cut deal also authorized exploration in 1.5 million acres in Alaska's ANWR. Sum this up as "Win-Win".