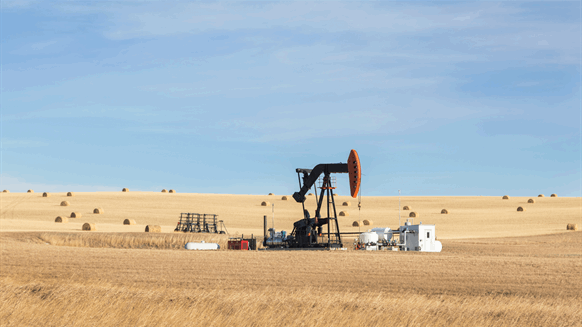 Canada's oil-rich province of Alberta is extending its output cuts by a year as delays to key pipelines threaten to prolong a glut of crude in the region.

(Bloomberg) -- Canada’s oil-rich province of Alberta is extending its output cuts by a year as delays to key pipelines threaten to prolong a glut of crude in the region.

The curtailment program, which will now end in December 2020, had been slated to wrap up at the end of this year as Enbridge Inc.’s expansion of the Line 3 pipeline began moving oil. But that project was set back by a year because of permitting delays in Minnesota, leaving the province’s drillers churning out more oil than they could ship to refineries. TC Energy Corp.’s planned Keystone XL line and the Canadian government’s expansion of the Trans Mountain conduit also have been bogged down by legal challenges.

Alberta’s delay in ending the curtailment program may help support oil prices, as U.S. Midwest and Gulf Coast refiners face the prospect of constrained shipments of Canadian heavy crude at the same time that they’re getting reduced supplies from Mexico and Venezuela. The policy is a mixed bag for Canadian drillers, who are benefiting from the higher prices but frustrated by their inability to expand output.

“This is a short-term solution, and it is the last thing we want to be doing,” Alberta Energy Minister Sonya Savage said during a news conference. “We’re doing it because it’s essential.”

Ending the program too early could cause a collapse in Western Canadian Select crude prices, hurting producers and reducing the value of royalties paid to the province, she said. Alberta could still end the curtailment before December 2020, but will need to do so in an orderly fashion, she said.

Without curtailment, the province estimates that production would exceed takeaway capacity by about 150,000 barrels a day.

The extension won applause from Cenovus Energy Inc., a major oil-sands producer that was among the most vocal supporters of the curtailment plan last year.

“We’re pleased that the province has taken steps to provide further market stability by extending the curtailment program until there is greater certainty regarding increased pipeline capacity,” Al Reid, the company’s executive vice president for stakeholder engagement, said in an emailed statement.

Some producers, like Suncor Energy Inc., criticized the program because their refining business was benefiting from lower crude prices and they weren’t as affected as others by the pipeline crunch.

To be sure, the production limits had already been raised throughout the year as more rail-shipping capacity has come online and pipeline operators expanded the volume that can go through their lines with improvements to pump stations or the addition of drag-reducing agents. The provincial production limit for October will be about 3.79 million barrels a day, up from 3.56 million in January.

The province also said on Tuesday that it’s raising the amount of a producer’s output that’s exempt from curtailment to 20,000 barrels a day from 10,000. That change, which takes effect in October, will shrink the number of producers affected by curtailment to 16, from 29 previously. The province has about 300 producers in total.

The curtailment program was drawn up last year after the pipeline pinch sent Canadian heavy crude tumbling to a record low, below $14 a barrel. Even before the system went into effect in January, the prospect of the production cuts sent prices surging. Since peaking above $56 in early-April, the heavy blend has lost roughly 23% to about $43 on Tuesday.

Before the recent price slide, curtailment had the unintended effect of making Canadian oil too expensive for refiners to receive via more-costly rail shipping, which for much of the year has kept storage levels in Alberta high. Those inventories finally started to shrink over the summer, with stockpiles dropping to about 46% of Alberta’s storage capacity in the three weeks through July 26, according to Genscape. That’s the lowest since November 2017.

Canadian producers including Suncor and Cenovus had been asking Alberta’s government to allow them to raise their limits if they can ensure that the additional production would be moving by rail and not taking up scarce pipeline space.

Nicole  |  September 09, 2019
Higher oil prices is expected in the coming months as supply will be lower than demand. Oil companies in the downstream sector can be very much affected.