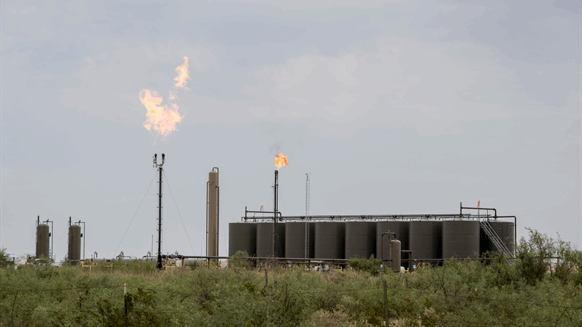 Just 30 fossil fuel companies account for nearly half of the planet-warming methane emitted by the world's energy sector.

Just 30 fossil fuel companies account for nearly half of the planet-warming methane emitted by the world’s energy sector, according to a new analysis by Global Energy Monitor.

Gazprom said it “consistently reduces the impact of its production activities on the environment” and has “minimal methane emissions throughout the entire production chain.”   China Energy and Iran’s oil ministry and company did not immediately respond to requests for comment.

Climate Offenders | Thirty fossil fuel companies are responsible for nearly half of the energy sector's global methane emissions, according to Global Energy Monitor.

Methane is the primary component of natural gas but can also be generated during oil and coal production. It has more than 80 times the warming power of carbon dioxide during its first two decades in the atmosphere and is responsible for around 30% of the global rise in temperatures since the industrial revolution.

For decades, fossil fuel producers deliberately released methane if they didn’t have the infrastructure to get it to market, but governments and institutions including the International Energy Agency are now calling on them to halt all non-emergency releases of the gas. That action is seen as one of the easiest and cheapest ways to cool the planet fast.

“There are vast differences between countries in how much methane they emit for each unit of oil and gas they extract. This shows that these emissions are avoidable,” Mason Inman, one of the authors of the report, said. “About half of oil and gas methane emissions could be eliminated at no net cost to the companies, since they would capture more natural gas and be able to sell it.”

More than 120 countries have signed the Global Methane Pledge, a US and EU-led effort that aims to slash methane emission at least 30% by the end of this decade and maintain a pathway that limits global temperature increases to 1.5 degrees Celsius. If the 30 corporate emitters highlighted in the GEM report reduced their methane emissions to zero, this would account for more than 80% of the total reductions envisioned for the fossil fuel sector to meet the 2030 pledge, Inman said.

The energy industry is responsible for about 35% of global methane emissions generated from human activity, second only to agriculture.

The IEA estimates that coal, oil, and gas operations emitted 126 million metric tons of methane last year. GEM’s analysis suggests that 19 oil and gas companies and 11 coal miners were responsible for 54 million tons of those emissions.