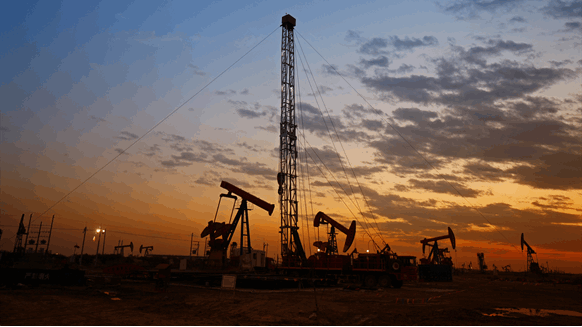 The US shale oil revolution continues to defy the skeptics.

The U.S. shale oil revolution continues to defy the skeptics, and the country is now producing a record 11 million barrels per day (MMbpd) of crude. Helped by higher prices, production has been up 18 percent since the start of this year alone. Output has exploded 120 percent over the past decade to heights not dreamed about. Production was long thought to have peaked at 9.6 MMbpd back in 1970.

The rush to shale has emanated from the rapid evolution and deployment of fracking and horizontal drilling technologies to extract petroleum and natural gas from shale rock. Texas and North Dakota have been at the forefront, with the former now yielding more oil than Iraq, the world’s fourth largest producer.

Looking forward, given that the United States has accounted for 60 percent of new global oil supply since 2008, one of the most pressing energy concerns remains: how long can the United States continue to produce increasing amounts of oil?

It’s surely a difficult question to answer. The shale bonanza itself has proven that predicting future energy production is a fickle business. Back in 2007, for instance, no forecasting body was projecting how quickly a U.S. shale oil (and natural gas) surge would not just change the U.S. outlook but also transform energy markets around the world. Despite using the most advanced forecasting techniques possible, both the Energy Information Agency’sNational Energy Modeling System and the International Energy Agency’s World Energy Model were completely blindsided.

So it is clear that nobody can be fully counted on to accurately predict future U.S. crude oil production. One reason is that the benefits of higher prices augmented by the non-stop advance of evolving technologies for production cannot be properly factored into any forecasting model. After all, these factors are always in flux and therefore ultimately unknowable.

We do know, however, that false pessimistic predictions regarding the future ability of U.S. companies to produce more petroleum have been around since the inception of the industry, when Colonel Edwin Drake’s first oil well was drilled in Pennsylvania in 1859. The record is known: “peak oil” theorists have been proven wrong every time.

Indeed, too many fail to appreciate oil as an economic commodity powered by market changes, namely the constant advance of extraction technologies. The obsession with reserves (what’s currently available) instead of resources (what’s potentially available with price changes and better technologies) has made most Americans completely unaware of how much oil we have at our disposal.

Proved reserves can grow over time and estimates of the recoverable resource change as new information is acquired—through drilling, production, and technological and managerial development. For example, BP plc reports that the United States now has 50 billion barrels of proven crude oil reserves, a 66 percent boom over the past decade.

The U.S. oil resource is measured in the hundreds of billions of barrels, maybe more. And it is obviously impossible to accurately predict “how much oil we have,” as some 95 percent of the immense, resource-rich U.S. Outer Continental Shelf is off-limits to oil and gas activity.

In fact, without drilling a single new well or making a new discovery, U.S. oil supplies could drastically be expanded. At least two-thirds of the total petroleum in a well is typically left behind after primary and secondary operations because it is too difficult or expensive to extract.

Now a tertiary technique that produces 0.5 MMbpd in the United States, CO2-based enhanced oil recovery (EOR) will grant us even more access to this hard-to-reach oil, while storing CO2 safely underground. Like shale has been, large-scale CO2-EOR recovery is the logical next step in turning the “unconventional” into the “conventional” when it comes to crude oil extraction.

For all of these reasons, it is easy to see why the EIA in recent years has continued to look farther into the future and envisioned more and more U.S. crude production (see Figure). Rick  |  November 09, 2019
Not a very prescient article, a year out and rig count plummeting. Eventually, DUC's will run out and the monster shale depletion rates will lead to a one way trip to fianancial ruin for companies like Diamond Back, EOG and Cheaspeake. Production will rebound if these zombie companies go bankrupt but if drilling at a loss continues then who knows when proces will come back.
HarryD  |  November 26, 2018
Why don't U.S. shale producers reduce production in response to much lower oil prices?
r.j. sigmund  |  November 21, 2018
the recent unexpectedly high crude inventories should be telling you that production has been under reported; line 13 of the weekly U.S. Petroleum Balance Sheet (unaccounted for crude) has been averaging north of 500,000 bpd for two months. production + imports - exports should equal oil refined + oil stored so more than likely, US production has already been running over 12 million bpd for at least a couple weeks now...that makes the above discussion moot..
Keith  |  November 20, 2018
In my opinion oil extraction in the shale plays has less to do with the "advance of extraction technologies" than it does the ability for E&P companies to continuously to get funding, even though many of them have not made a profit even when higher commodity prices were present. If the funding evaporates and interest rates make credit too expensive I think we could see a repeat of the shale bubble busting once again, regardless of technology.
DP Lonchay  |  November 20, 2018
Tertiary recovery should also considered: EOR - CO2 based is, and should/will be used (see article). Another technique is ASP (Alkali / Surfactant / Polymer) based EOR which, although comparatively expensive, can nevertheless be put into action when the price of oil is sufficient to offset the cost of this particular EOR technique which can, if properly applied, push recovery from existing production wells up to / near 70% of initial in place reserves (compared with up to 35-40-45 % in case of secondary recovery).
John Symons  |  November 19, 2018
At least one connection of mine would welcome fracking in New York State, as I would welcome the end of the ban in Scotland. "Production based solely on economic grounds" has to be done with a careful eye on the oil price forecast on which the economic analyses are based. The USA could certainly produce more oil and gas, but too rapid a ramping up of production could lead to price falls that result in an early shut-in of previously existing wells, a serious waste of capital.
Chris J.C. Hansen  |  November 19, 2018
The longevity of tight low permeability production should be a much more serious consideration then it is. We are opening these formations up with fracturing with excellent immediate results and basing that return on the return history of high permeability formations. Our data might be very incomplete at this point.
Larry Harrison  |  November 19, 2018
I spent 47 years in the Oil & Gas Industry, I started in '65 and have lost my family and kids during the Embargo in '73, and lost several jobs during the first 22 years of my career. It was one hell of a roller coaster ride. I spent the last 25 years working for ExxonMobil, and it is not an easy company to work for because they create a competitive work environment to get all they can get from their employees. Only the ones that can keep up or suck-up manage to keep their jobs, I did neither but I kept my job only because of my abilities, not a team player. They did not like it, but they got more than I was paid to do. When they decided to get into Shale O&G ~ 2007 - 2008, they were a decade behind on fracing technology, so I was assigned two separate divisions working on electro-fracing at there Colony Site in Rifle, CO and working on a plunger design for Piceance Basin, CO. I was split between two divisions and two related projects, after about 2 1/2 years I was put out on work-related stress for over one year with full pay only to return for one week to be terminated. My co-worker was a Chinese Geo scientist, and he disagreed with my design, but I done a number of trial field tests which were successful. A lot a stress came from the electo-fracing process in CO because they were destroying Natural Resources created by God. God created and he can replenish them, but man has chosen to take every drop of oil from the earth by new technology that requires the use of the most valuable resource and that is water. I understand the fracing process, and once they drill the well and frac it with contaminated water & toxic chemicals, then they have destroyed the most important one of all. They also run the risk of contaminating aquifers as well, so they are stealing a needed natural resource for financial gain. People refer to it as Climate as the reason for all the catastrophic disasters, no it is God warning them. One day everyone responsible will be held accountable for what they have done. Drill baby Drill, Rex Tillerson's statement.
Urs Broderick Furrer  |  November 19, 2018
Most interesting. Imagine what U.S. production would be if we removed short-sighted political considerations and production was based solely on economic grounds? We would be drilling in the southern tier of New York, off shore and elsewhere creating untold new jobs and generating windfall tax revenues for regions that currently foresee any economic growth.