Why Rapid Shale Production is a Perk 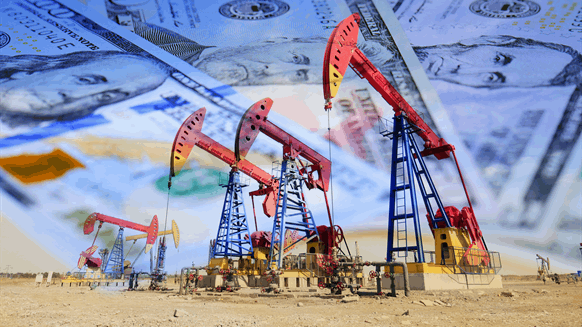 The accelerated production of shale wells leaves them uniquely positioned to take advantage of the peaks and plateaus in oil prices.

Since the early days of shale oil and gas production, some analysts have expressed alarm about the rapid decline that those wells experience, suggesting either that this will harm shale’s financial viability and/or lead to an early peak and decline in overall production.  But this attitude fails to acknowledge the benefits of producing a resource rapidly.

It is true that it seems inefficient to install capacity that will quickly be underutilized. No one builds a refinery that will see its utilization drop to 20 percent in a few years. But that is the nature of producing fluids; a field can be designed to produce at a constant rate, but only by offsetting the decline in individual well production, whether by enhanced recovery methods and/or additional drilling.

The contrary interpretation of rapid decline is that it represents accelerated production and thus, accelerated revenue accrual. Investment depends on capital and so revenue must be discounted by something roughly akin to the borrowing rate or desired rate of return, usually from 10 to 15 percent per year. In simple terms, money sooner is better than money later, all else being equal.

The first figure shows representative production curves for a conventional oil well, declining at 8 percent per year, and a shale well whose production drops 65 percent in the first year but flattens out thereafter. In each case, the total production (over eleven years) is about one million barrels. Considering the discounted cash flow, or revenue which is discounted by 12 percent per year from the initial year, the difference becomes a bit more clear. The second figure shows the discounted revenue for the same wells from 2019 to 2030. The shale well’s front-loading of revenue is clear and financially valuable; total net present value is $36 million versus $29 million for the conventional well in this example. There is another, somewhat speculative, benefit that shale producers are better positioned to exploit: the impact of supply disruptions. Although all commodities suffer from volatile prices usually due to influences that are not predictable in the medium term, like severe or beneficial weather, the oil industry is particularly prone to fluctuations that persist for a time.  As the figure below shows, the Arab Spring in 2011 disrupted Libyan production and tighter sanctions on Iran in 2012 caused its production to drop. While there were offsetting factors, incidents such as this increase the probability that prices will be elevated for a period of several years. In such cases, being able to bring shale wells on-line and produce a large portion of reserves in 18-24 months can greatly increase the payout for a producer. Instability in a case like Libya’s can be expected to persist for the near-term future, but beyond that, the uncertainty grows. A deepwater platform that takes years to develop and extracts its reserves more slowly is at the whims of the market.

Naturally, there are many other factors that drive oil price cycles in the short-, medium- and long-term, but the accelerated production of shale wells leaves them uniquely positioned to take advantage of the peaks—and hopefully plateaus—in prices that occur from time to time, particularly when they are driven by effects that appear lasting, as with the Arab Spring.

Overall, then, it is time for pundits to cease decrying the rapid decline in production from shale wells as a curse and recognize it as valuable.