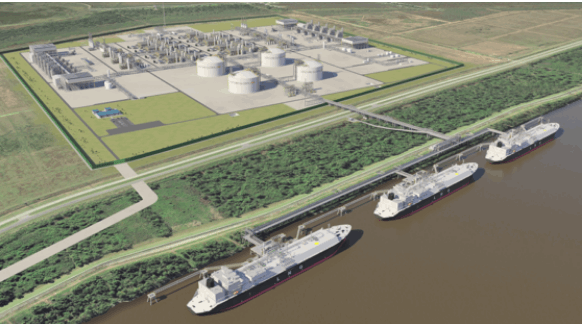 Above is a rendering of the Plaquemines LNG facility. IMAGE SOURCE: Venture Global LNG, Inc.

Under the SPA, EDF will purchase 1 million tonnes per annum (mtpa) of LNG for a 20-year term starting on the commercial operations date of the Venture Global Plaquemines LNG export facility under development along the Mississippi River south of New Orleans, La., Venture Global stated. The firm noted that EDF will purchase the LNG on a free on board (FOB) basis.

As Rigzone reported last summer, Venture Global has also signed an SPA with Polish Oil and Gas Co. (PGNiG) under which PGNiG will purchase 2 mtpa from the Plaquemines facility and an additional 1 mtpa from the Calcasieu Pass terminal in Cameron Parish, La.

According to Venture Global, the 20-mtpa Plaquemines LNG terminal’s configuration will be identical to that of the Calcasieu Pass facility. Commercial operations at the 10-mtpa Calcasieu Pass complex are slated to begin in 2022.

Venture Global noted that construction on the Plaquemines project, which has received required final authorizations from the Federal Energy Regulatory Commission and the U.S. Department of Energy, should start this year. The company anticipates a 2023 commercial operations start date for Plaquemines LNG.