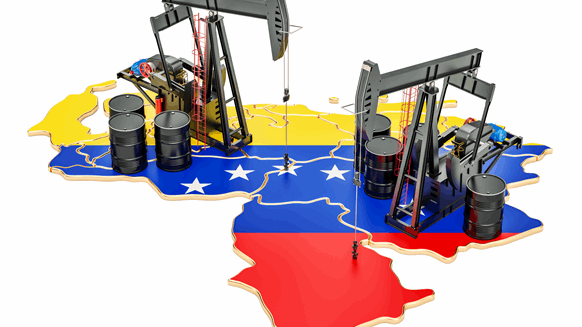 Rystad Energy forecasts Venezuela's crude oil production to fall below 700,000 barrels per day by 2020 if the country is not able to offset effects of US sanctions.

Venezuela’s oil production freefall could continue into 2019 and fall below 700,000 barrels per day (bpd) in 2020, according to new research by Rystad Energy.

Less than a month after the Trump administration issued sanctions that prevent Venezuela’s state-owned oil company PDVSA from exporting crude to the United States, Rystad’s estimates show Venezuela’s oil production dropping by 340,000 bpd year-on-year to one million barrels per day (MMbpd) in 2019. In 2020, it slips further to 890,000 bpd.

“In the low case scenario, where the status-quo continues and Venezuela is unable to offset the effects of U.S. sanctions and secure new financing, the country could see an additional 20 percent reduction in crude output this year, dropping to about 800,000 bpd, before sliding to 680,000 bpd in 2020,” Rystad reports.

Bloomberg recently reported that Venezuela’s neighboring country of Guyana would produced 750,000 barrels of crude per day by 2025 – more than estimated production in Venezuela.

Under a high-case scenario in which U.S. sanctions are lifted and new financing agreements are secured, Rystad believes Venezuela will be able to slow the downward trend, with crude production sliding to 1.11 MMbpd in 2019 and 1.06 MMbpd in 2020.

Rystad expects some operators in Venezuela will run out of the crucial diluent by March and without diluent, the current 200,000 bpd of heavy crude exports are at risk.

Looking at the scenario of a regime change leading to U.S. lifting its sanctions and attracting new financing agreements, Rystad forecasts the following: