US Warns Russia It May Sanction New Gas Pipeline to Germany 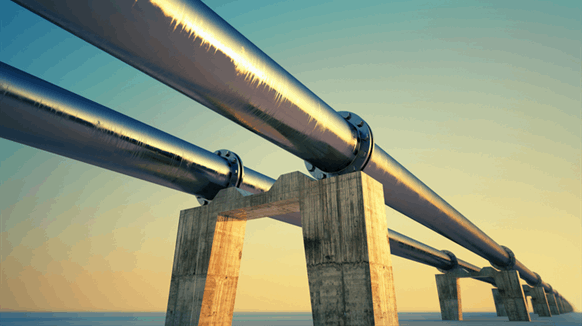 US warns Russia that it may follow through on sanction threats over the construction of a major natural gas pipeline to Germany.

(Bloomberg) -- The U.S. warned Russia that it may follow through on sanction threats over the construction of a major natural gas pipeline to Germany.

Asked if the U.S. might impose punitive measures against Nord Stream 2 and other projects, Energy Secretary Rick Perry answered “yes,” during a joint news conference with his Russian counterpart Alexander Novak on Thursday in Moscow. “Minister Novak and I both agree that getting to that point of sanctions is not where we want to go,” he said.

Perry urged Russia to be a “responsible supplier” and to stop using its resources for “influence and disruption,” adding that the U.S. opposes the gas link because it would concentrate two-thirds of Russian exports of the fuel to the European Union in a single choke point. Novak said that Russia was concerned if the U.S. sanctions a “competitive” gas pipeline.

Nord Stream 2 would double Russia’s current capacity to deliver natural gas directly to Germany under the Baltic Sea and circumvent Ukraine. The project would be a major supply route to the EU and has been a sore point between the U.S. and its allies.

In July, U.S. President Donald Trump slammed what he called German dependence on Russian energy, saying it made the nation “captive” to Moscow. The Kremlin said Trump’s attacks were economically motivated and an attempt to promote U.S. liquefied natural gas in Europe.

Later that month, Trump eased his tone after a summit with President Vladimir Putin, saying the U.S. could compete successfully with the Russian gas pipeline even if the project wasn’t in Germany’s best interests.

Trump last year signed a law giving him the right to sanction companies involved in Nord Stream 2. Royal Dutch Shell Plc, BASF SE’s Wintershall unit, Uniper SE, OMV AG and Engie SA have agreed to provide Russia’s Gazprom PJSC with financing for the 9.5 billion-euro ($11 billion) pipeline and could be at risk of penalties.

Rebecca Wood  |  September 18, 2018
Looks like someone has started something he's not able to finish. With the lifting of US restrictions on LNG Qty's approved for export this is going to be an interesting Mexican Standoff.
WorldCommenrter  |  September 14, 2018
Russia has used it natural gas and oil resources to "hammer" the economy of Ukraine and other ex-Soviet Republics or ex-Warsaw Pact countries, where it has near monopoly supply. The winter cut-off of natural gas to Ukraine and Europe several years ago was just an example of "muscle flexing". Russia is developing its gas and oil resources as fast as possible, while using political and regulatory "influence" to decrease everyone's else's development and production efforts. Do you think that Russian oil and gas developments have less environmental impact than US activities? Russian gas or oil produces just as many GHGs as anyone else's.