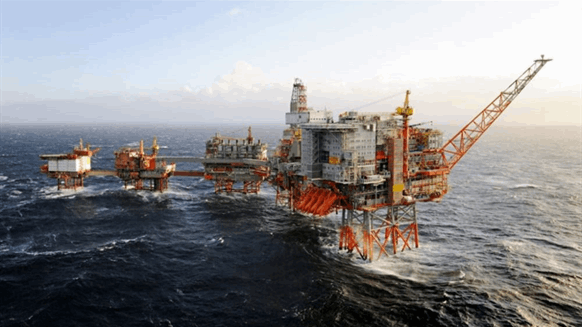 Wednesday, July 01, 2020Firmer oil prices have resulted in companies bringing back some wells they shut over April and May. However, the recovery road could be a long one this time around.

Wednesday, July 01, 2020Kvaerner will dismantle and recycle structures from the Valhall and Hod fields in the Norwegian North Sea. PHOTO SOURCE: Kvaerner


ConocoPhillips to Ramp Up Oil Production

Wednesday, June 24, 2020Associated gas from oil fields will be hit most, losing some 5.5 percent compared to 2019 levels.

Monday, June 22, 2020New Mexico is exhibit A of this boom-to-bust dynamic, with the state's revenue forecasts plunging and over 4,600 workers in mining.

Thursday, June 18, 2020Iraq agreed on the details of how to compensate for falling short of its production cut target in May.

Thursday, June 11, 2020The Texas Alliance of Energy Producers' monthly measure of growth rates and cycles in the state's upstream oil and gas economy shows record declines across nearly all indicators from March to April.


Oversupply Is a Thing of the Past

Tuesday, June 09, 2020Oversupply is a thing of the past as long as OPEC+ compliance stays strong and the oil demand recovery trajectory isn't radically altered.

Wednesday, June 03, 2020Unlike the oil market, there's been no sign of a coordinated response to address the gas glut.

Monday, June 01, 2020OPEC+ is set to discuss a short extension of its current output cuts, according to a delegate.

Wednesday, May 27, 2020Crude oil production in Texas dropped year on year in March, according to the Railroad Commission of Texas' latest figures.

Wednesday, May 27, 2020US shale drillers may still take at least a year before moving rigs back into the field.

Tuesday, May 19, 2020Oil production from the top seven shale regions in the U.S. is set to tumble to levels not seen since 2018.


No One Expected Shale Cuts to Happen So Fast

Monday, May 18, 2020Drillers are laying down rigs and shutting in wells at a frantic pace in response to the plunge in oil prices caused by the coronavirus pandemic.


US Shut-Ins Could Reach 2MMBPD in June

Thursday, May 14, 2020Gross U.S. production cuts could reach two million barrels per day in June, according to Rystad Energy.


Is Rig Count a Reliable Production Gauge These Days?

Wednesday, May 13, 2020The link between oil and gas output and the rig count may have come adrift.


Oil Market Recovery Could Be Erratic

Tuesday, May 12, 2020Some drillers in the biggest North American oil field are reopening wells shut in response to the pandemic-driven price collapse, according to pipeline giant Energy Transfer LP.


2Q To See Most Liquid Production Cuts Ever

Monday, May 11, 2020The second quarter of this year will see the largest volume of liquids production cuts, including shut-in production, in the history of the oil industry, according to IHS Markit.


Continental to Curtail 70 Percent of Oil Output in May

Monday, May 11, 2020It's one of the most aggressive production cuts announced to date among US producers.


Texas Votes No on Proration

Wednesday, May 06, 2020The Texas Railroad Commission voted against government mandated cuts at its latest meeting on May 5.

Tuesday, May 05, 2020Unprecedented crude oil demand declines over the second quarter of the year will wipe out over a decade of industry growth in barrel terms.


Chevron Down to 5 Permian Rigs

Tuesday, May 05, 2020Chevron is currently running five rigs in the Permian basin, the company's chairman and CEO, Mike Wirth, revealed in a recent Bloomberg television interview.

Tuesday, May 05, 2020Some shale producers said all they need is $30 oil to consider bringing back curtailed crude output.


Amid Oil Rout, Challenge Is Picking Which Wells Close
Monday, May 04, 2020Figuring out which wells to shut, and for how long, is the hard part.

Monday, May 04, 2020He expects a proposal for mandated production cuts is now dead a day before the state will vote on the measure.

Friday, May 01, 2020ConocoPhillips estimates its voluntarily production cut in May will amount to 265,000 barrels of oil per day gross.


OPEC Output Surged Most in 30 Years in April

Friday, May 01, 2020Saudi Arabia, the cartel's most powerful member, pumped a record of more than 11 million barrels a day.

Thursday, April 30, 2020The oil-price war may be over, but the effects are still rippling through the market.


The Outlook for US Oil and Gas Production

Wednesday, April 29, 2020Longer-term, the outlook for US production is not all gloom as domestic demand will clearly return.


How Much Oil Does OPEC Really Have?

Monday, April 27, 2020With Saudi Arabia as the linchpin, OPEC's importance in the global oil market is clear.


US Fracking Set for Biggest Ever Monthly Drop

Friday, April 24, 2020The Covid-19 pandemic, coupled with low oil prices, is likely to cause the largest monthly drop in fracking activity ever recorded in the United States, according to Rystad Energy.

Thursday, April 23, 2020Dire market conditions and Covid-19 have sent Iran scrambling for ways to monetize its sanction-ridden barrels at a time of historically low prices.


OPEC Sees its Oil Demand Dropping to Lowest in 30 Years

Friday, April 10, 2020After much speculation, OPEC+ has finally confirmed what the group agreed to at its latest webinar meeting, which lasted for several hours.


Who Is In and Out of OPEC++ Output Deal?

Wednesday, April 08, 2020The Organization of Petroleum Exporting Countries and its allies are set to meet by video conference at 4 p.m. Vienna time on Thursday.

Wednesday, April 08, 2020US shale drillers are engaged in a bitter test of wills as sinking oil prices force the weakest operators to retreat.

Tuesday, April 07, 2020Oil resumed gains on signs the world's biggest producers are moving toward a deal to call off their price war and cut output as the coronavirus eviscerates energy demand around the world.