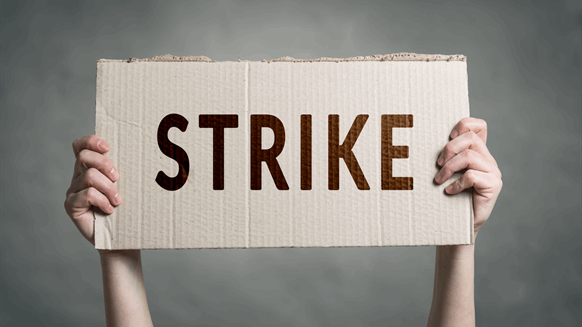 A total of 96.8 percent of the members were said to have voted in support of industrial action on a 96.9 percent turnout. The dispute centers on Total's proposals to move to a three on/three off rota at the Shetland Gas Plant, according to Unite.

The union said the result will add to the “mounting pressure” on Total E&P UK, who it said was facing a similar ballot for offshore members who work on the Alwyn, Elgin and Dunbar platforms “over the company proposals to review terms and conditions across its North Sea operations”.

“The emphatic support for industrial action by Unite members at Total E&P Shetland Gas Plant will add to the mounting pressure on the company to get back round the negotiating table,” Boland said in an organization statement.

“If Total E&P continue this counter-productive and intransigent path to enforce three-week shift rotas then this will inevitably lead to widespread disruption across its operations,” he added.

Total E&P UK was not immediately available for comment.

Unite, along with fellow UK union RMT, has previously condemned the three-week-on three-week off shift rota present within the UK.

daniel domnick  |  June 28, 2018
Well Patrick, just maybe they are not pampered snow flakes, just maybe they work to live and have a half decent family life. O was from the oil industry for over 35 years starting first at ICI Ardeer now gone, then Gas Pipeline Great Yarmouth to Norwich Gas Plant and the Building of Sullom Voe, Offshore on many facilities and also worked middle east and did shutdown project work. there for 3 months not weeks.I also worked at Sullom Voe and wasas my the last position I held before the missuses grounding me. I worked 2x2 and completely enjoyed it. You Patrick obviously have no concern for your family and think it is all about the money.Well since the wages were decimated from what they were in 2010 and have never really come back to match those days the condistions were also decimated. I don;t really get the strike action for Shetland for as far as I remember the boys on the tools were 3 weeks on and 1 week off and others 19 days on 4 days off. The 3 weeks on 3 weeks off in the north sea is a horendous rota. That said as we come back into the construction work cycke of the North Sea the 3 on 3 off will be going back to 2 on 2 off as the 3 x 3 can not work with the chopper flights when in full capacity
Patrick Cadenhouse-Beaty  |  June 25, 2018
These pampered snowflakes could always work 5 on and 2 off, like most people do.......