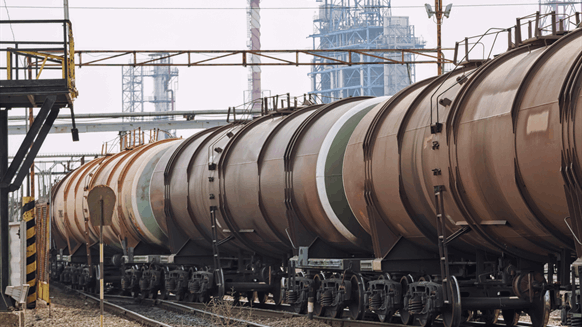 Oil companies are turning to rail cars to stash the crude they can't sell.

(Bloomberg) -- Oil companies are turning to rail cars to stash the crude they can’t sell, as the world runs out of places to store a growing glut of cheap barrels.

North American producers, refiners and traders are now looking to store excess oil in rail yards in Texas, Saskatchewan and Manitoba amid the crude market’s historic plunge and collapsing demand, according to people familiar with the matter.

With oil for May delivery trading at a steep discount to future months -- a structure known as contango -- more firms are hoarding barrels rather than sell at a loss. But crude tanks and supertankers are filling up fast, with the world projected to run out of storage space by the middle of the year, according to IHS Markit. In Canada, tank-tops could be breached within two to three weeks, Goldman Sachs Group said, while U.S. stockpiles last week rose for the 10th week, increasing by the most in three years.

“Rail certainly is an economic option to store crude while the contango is at historic levels,” said Sandy Fielden, director of research for Morningstar Inc. “A trader has to mitigate risks associated with quality and location because rail yards may not be located in major oil trading hubs.”

A decade ago, transporting crude by rail was rare, while stowing oil in a tank car was virtually unheard of. But as the shale boom unleashed record volumes of crude, overwhelming pipeline capacity, producers have increasingly come to rely on rail to move barrels from one point to another. Now, crude-by-rail service providers and terminal operators are fielding inquiries about leasing cars for storage.

The situation is particularly dire in the land-locked Canadian province of Alberta, where local heavy crude is trading at less than $10 a barrel, according to NE2 Group. In some parts of the U.S., prices for physical barrels have gone negative.

Although no contracts are finalized, some companies have inquired about using the cars for 3 months to a year, said the people, who asked to remain anonymous because the talks are private.

The last time rail cars were used to store crude was during the 2016 price rout when the market structure was similarly bearish, according to Ernie Barsamian, chief executive officer of The Tank Tiger, a terminal storage clearinghouse. “And it was an exception rather than a rule,” he added.

This time around, market dynamics are even more favorable to storage and rail cars are, for now, a viable option. Leasing costs have declined from around $1,200 a few months ago to less than $700 now, as demand for shipping crude has dwindled amid the price rout, the people said.

Storing a loaded rail car would cost $300-$450 a month, putting the total bill at around $1.50 a barrel per month, Barsamian said. “If you can get the crude cheap enough, it’s game on.”

But crude-laden tank cars can’t be stored just anywhere. In the U.S., they can only be stashed on private tracks due to Federal Railroad Administration rules governing hazardous materials. Rail yards must also be equipped with additional security and adequate fire protection equipment, said one person.

Under proper conditions, rail cars are a safe alternative to more conventional modes of storage. But getting large volumes of oil to rail yards raises concerns about leaks and spills, according Jared Margolis, a senior attorney at the Center for Biological Diversity.

“That’s the big risk,” he said. “Moving it around in order to store it.”

To contact the editors responsible for this story:
David Marino at dmarino4@bloomberg.net
Catherine Traywick, Joe Richter