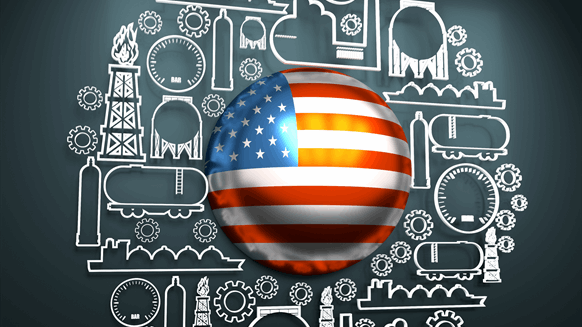 Recognize this pandemic down year as the anomaly that it is.

After a record 2019, it has been a rocky ride through the pandemic for the U.S. LNG export business. Sunken prices and demand globally have shrunk our shipments abroad. In January, exports were up over 9 billion cubic feet per day (Bcf/d) before steadily falling to 2.5 Bcf/d at the end of August, with facility utilization bottoming out at 20 percent. From April to November, there were nearly 180 cargo cancelations, and RBN Energy estimates that a whopping 550 Bcf of gas was pushed back into the U.S. market in summer alone.

But U.S. LNG exports have been picking up in recent weeks, as the figure in this article shows. Asian prices have been rising quickly amid rebounding demand and forecasts of a frigid winter. Even through hurricane-related shut-ins in our shipment zone along the Gulf of Mexico, U.S. LNG demand has been at record levels of over 10 Bcf/d in recent weeks. All six of our facilities have been online.

With Covid-related lockdowns in Europe, the Asian market remains the bright spot. Buying has remained steady to support the Japan/Korea Marker price trading above $7.00 per MMBtu, up from below $2.00 back in May and opening arbitrage opportunities for U.S. sellers.

This rebound has been made all the more impressive since global oil prices have remained low (approximately $42), normally giving a leg up to competitors that index their LNG prices to crude. Latest U.S. Energy Information Administration (EIA) data for August had Japan (21 percent), South Korea (13 percent), China (13 percent) and India (9 percent) taking the bulk of U.S. sales. 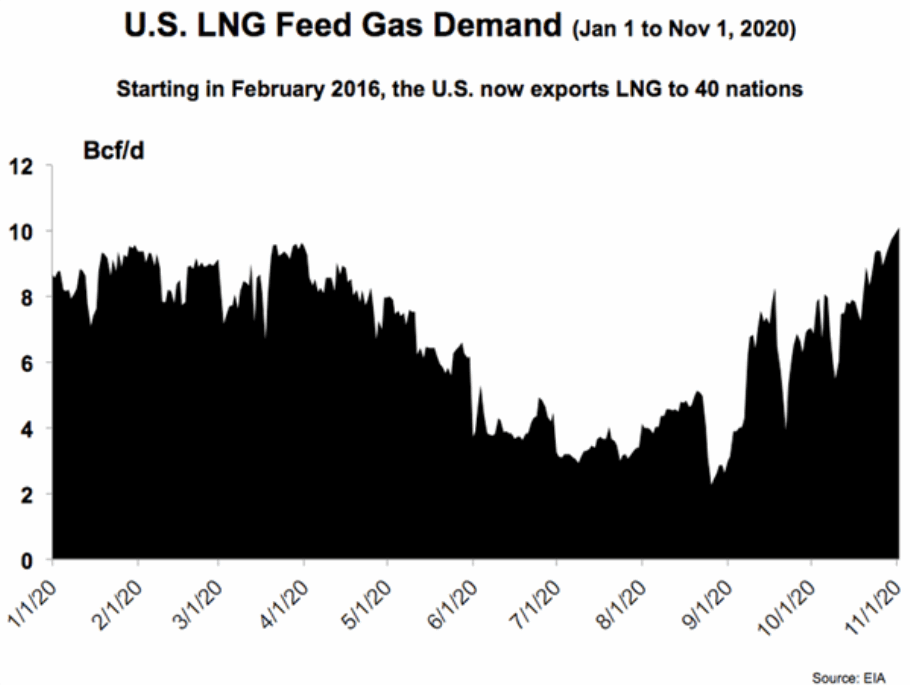 US LNG exports have been picking up in recent weeks.

Indeed, this pandemic down year must be recognized as the anomaly that it is. Looking forward, global LNG market balance should be restored in 2021 as rising demand collides with slower supply growth. The long-term fundamentals remain strong. In February, Shell’s LNG Outlook 2020 had global consumption doubling by 2040 to around 100 Bcf/d. LNG is the largest incremental market for U.S. natural gas.

For U.S. producers and shippers, sustainability will be key, especially for selling into Europe. Importantly, the French government recently delayed a $7 billion U.S. LNG deal with Engie over worries about leaked methane emissions from this “fracked” shale gas. But there is U.S. bipartisan support to stop these leaks, with many in the industry also pushing for more oversight. After all, methane is a product so such fugitive emissions are lost income.

And it must go mentioned that LNG is a critical part of the net-zero goals for carbon, especially important for lowering the overreliance on higher emission coal in Asia. Net-zero carbon BP, for instance, plans to double its LNG portfolio by 2030. Total just delivered a net-zero LNG cargo to China, offset with Verified Carbon Standards emissions certificates financing a wind farm and a forest project.

Hugely populated nations like India, Pakistan and Bangladesh also want more low-cost U.S. LNG. And these nations are horrifically energy-deprived, so they are unlikely to restrict options much for decades to come. They realize the “only wind, only solar” Western push as unrealistic and hypocritical. U.S. developers are looking at shorter and more flexible contract terms to help these key buyers gain commercial support for new import terminals.

There are other reasons to go bullish on U.S. LNG. The Trump administration has been extending authorizations through 2050. A potential Biden administration could also lower trade tensions with China and increase access to the world’s largest importing market. Cheniere just announced a framework agreement to sell China’s Foran Energy Group 26 LNG cargoes from 2021 to 2025.  We are also becoming the world’s swing supplier.

With domestic gas production expected to outpace demand by a 2-1 margin, U.S. selling options abroad should remain strong. The U.S. Department of Energy forecasts that domestic gas prices will stay below $3.70 through 2050. The Federal Energy Regulatory Commission reports some 50 Bcf/d of capacity now under consideration. And with an immense low-cost proven reserves base of at least 500 trillion cubic feet, the U.S. is still on pace to become the premiere exporter within three to five years, passing Qatar and Australia.