Recent upstream job losses in the Lone Star State are worse than previously reported, according to the Texas Alliance of Energy Producers.

Updated employment estimates from the Federal Reserve Bank of Dallas and the Texas Alliance of Energy Producers (the Alliance) show that upstream oil and gas industry job losses in the Lone Star State are worse than previously reported, the Alliance revealed Wednesday.

“The revised employment estimates clearly suggest that COVID-19 has cut into the upstream oil and gas sector to a deeper extent than previously thought – and those numbers were bad enough to begin with,” remarked Karr Ingham, petroleum economist for the Alliance and creator of the organization’s Texas Petro Index (TPI).

The TPI is a cyclical health and vitality measure of Texas' oil and natural gas economy.

“More than 35 percent of all upstream jobs were lost in a 20-month period from December 2018 to August 2020," Ingham continued. "Most of that occurred in 2020, with the industry shedding nearly 30 percent of upstream oil and gas jobs just between February and August of this year.”

The Alliance noted that headline industry employment data – updated and revised only once per year – shows the Texas upstream shed nearly 70,000 jobs from Dec. 2018 through Aug. 2020. Factoring in new data from the Dallas Fed and the Alliance, however, suggests the state actually lost more than 80,000 upstream jobs during the period, the Alliance continued. Moreover, the organization stated the job losses from February to August this year approached 60,000 rather than the previously reported 50,000.

According to the Alliance, oil and gas “support activities” jobs with service and drilling companies and other areas accounted for nearly all of the revisions. In contrast, it stated that operating and producing jobs under the oil and gas extraction category largely escaped the recent update.

Despite the higher job loss numbers, the Alliance pointed out that Aug. 2020 still appears to have marked the trough in terms of Texas’ upstream job losses for the latest industry downturn. The group noted the statewide upstream job count grew by approximately 1,500 through October.

“It will be a long climb back, and indeed time will tell whether or not the industry will ever return to the pre-downturn levels reached in late-2018,” Ingham said.

Ingham observed Texas’ total upstream employment estimate for October of this year is down by nearly 78,600 jobs against the Dec. 2018 cyclical peak of 228,500. The Alliance added that upstream employment includes oil and gas extraction (operating and producing), oilfield service and drilling jobs.

Given the updated employment figures, the Alliance also lowered its TPI – from a revised 144.0 for September to 139.9 for October. The latest TPI move reflects the 20th consecutive monthly drop in the Texas upstream tracking metric, the organization added. The graph below from the Alliance’s website shows how the TPI has changed over time. 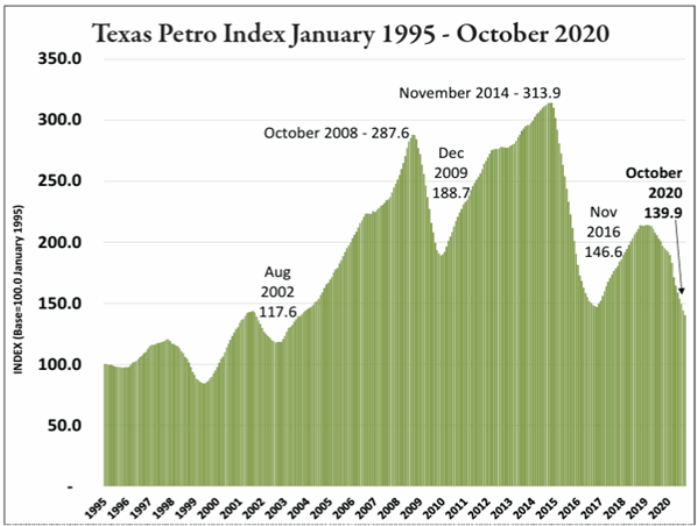 The Oct. 2020 figure is down nearly 29 percent against 196.8 for Oct. 2019 and nearly 35 percent compared to the TPI’s most recent peak of 213.8 in Feb. 2019, the Alliance stated. To be sure, it also noted that most upstream indicators used to calculate the TPI – including crude oil prices, rig count and industry employment – have shown improvements against pandemic low points earlier this year.

The Alliance noted that specific findings from the Oct. 2020 TPI analysis include:

“A turnaround is coming in the Texas Petro Index as various measures of oilfield activity continue to improve,” concluded Ingham. “Crude oil prices have continued to register improvement sufficient to grow the statewide rig count from record low levels, and other upstream indicators will follow suit.”

To contact the author, email mveazey@rigzone.com. More detailed information linked to the latest TPI figure is available from the Texas Alliance of Energy Producers.