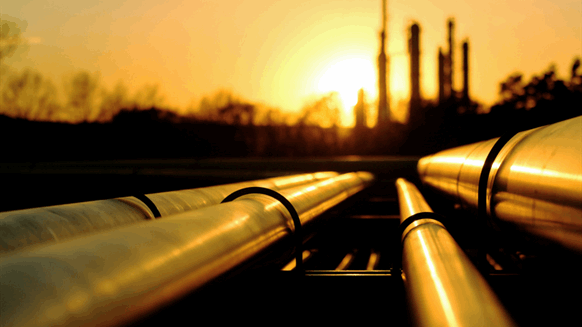 Enterprise Products Partners L.P. (EPD) reported Friday that it will expand its Midland to ECHO crude oil pipeline system. The firm stated the project will link its 6 million-barrel Midland, Texas, storage facility to its ECHO Terminal in Houston through its Eagle Ford system in South Texas.

“The proposed route for this pipeline would originate from our Midland terminal and tie into our Eagle Ford system in South Texas,” A.J. “Jim” Teague, CEO of Enterprise’s general partner, said in a written statement.

“The route would avoid the Edwards Aquifer, including its recharge and contribution zones,” he said.

According to EPD, the pipeline – set to begin service in the first half of 2021 – will boast an initial capacity of 450,000 barrels per day (bpd) but can be expanded to 540,000 bpd. The company added that its Houston crude oil distribution system includes more than 45 million barrels of storage and roughly 4 million bpd of export capacity via EPD’s marine terminal network. Also, EPD noted the system links to approximately 4.5 million bpd of refining capacity in the Houston, Texas City and Beaumont/Port Arthur areas.

Besides providing new Permian crude takeaway capacity, the pipeline will help EPD to optimize its entire four-pipeline Midland to ECHO system, the company stated. It noted that it expects to achieve $60 million in annualized cost savings primarily by significantly reducing the use of costly drag-reducing agents and managing pump operations.

Citing an expected 50-percent increase in natural gas liquids (NGL) production from the Permian by 2025, EPD also stated the new pipeline will enable it to revert its Seminole Red pipeline back to NGL service during the second half of 2021. Earlier this year, in response to strong demand for crude oil capacity from Midland to the Houston market, EPD converted Seminole from mixed NGL to crude oil service, the firm explained. The company added that it estimates it can make the switch in less than 60 days and will retail the capability to convert the pipeline back to crude service if needed.

EPD contends the project will also allow its customers with crude oil and condensate production in both the Permian and Eagle Ford to maximize the value of their contracted pipeline capacity by strategically sourcing production from either play or both.

“Our system allows us to provide producers in the Permian Basin and Eagle Ford shale with segregated storage, transportation, distribution and marine terminal services,” stated Teague. “This integrated model supports customers’ needs for flow assurance and market choices, whether the markets are domestic of international. It also  enhances the value of production destined for international markets by assuring product segregation, quality and consistency based on the customer’s production.”

Teague also commented that the project will give EPD the flexibility to respond to crude oil and NGL pipeline demand fluctuations in the long term, adding that crude and NGL output from the Permian and Eagle Ford are projected to grow by 5 million bpd by 2025.

“The economic returns for this expansion are also supported by our opportunity to reduce costs,” said Teague. “In the aggregate, our total crude oil pipeline capacity from the Permian to ECHO will be able to swing from a low of 1.4 million bpd to 1.8 million bpd, depending on market demand.”