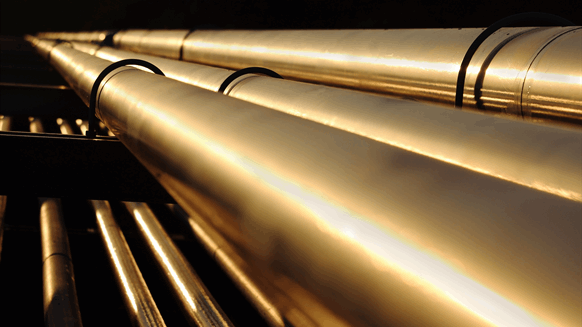 The Baymark Pipeline will extend from near Bayport to Markham, Texas.

Enterprise Products Partners L.P. reported Tuesday that it is extending its ethylene pipeline and logistics system further into South Texas, a growth center for crackers and ethylene derivative plants.

According to the midstream firm, the new Baymark ethylene pipeline will extend approximately 90 miles from the Bayport area in southeast Harris County to Markham in Matagorda County. Enterprise, which is developing the pipeline with the Formosa Plastics Corp. subsidiary Lavaca Pipe Line Co., will own the majority stake in the conduit and serve as its operator and commercial manager.

“The U.S. petrochemical industry is experiencing unprecedented growth with production of ethylene expected to exceed 100 billion pounds per year by 2025,” A.J. “Jim” Teague, CEO of Enterprise’s general partner, said in a company statement. “This growth in the petrochemical sector is creating additional opportunities for Enterprise to grow our midstream petrochemical services.”

Enterprise stated the Baymark Pipeline will provide access to a high-capacity ethylene storage well the company is repurposing at the Mont Belvieu natural gas liquids storage hub. Moreover, the firm noted the pipeline will be connected to the ethylene export terminal under construction at Morgan’s Point on the Houston Ship Channel. The storage well, which will boast 600 million pounds of capacity, should be completed during the third quarter of this year and the terminal, which will be able to export roughly 2.2 billion pounds of ethylene per year, should begin service the subsequent quarter, Enterprise reported.

The Baymark Pipeline will provide “producing and consuming customers with enhanced access to the largest liquids storage hub in North America at Mont Belvieu, as well as linking them to growing domestic and international markets,” said Teague.

Enterprise anticipates the Baymark Pipeline will go into service during the fourth quarter of 2020.