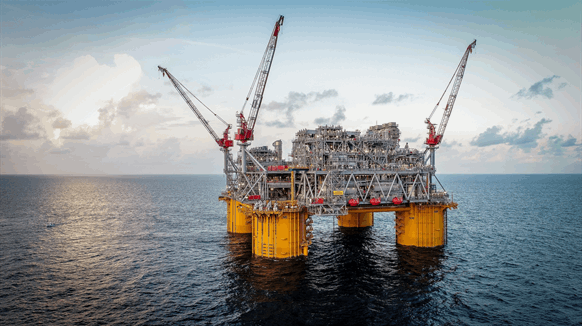 According to a written statement from Shell emailed to Rigzone, the production start-up occurred “months ahead of schedule” and opens “a new frontier” in the deepwater U.S. GOM. Shell, which operates Appomattox and owns a 79-percent stake in the field, anticipates a production rate of 175,000 barrels of oil equivalent per day. CNOOC Petroleum Offshore U.S.A. Inc. holds the remaining 21-percent interest in the joint venture.

“That Appomattox was safely brought online ahead of schedule and far under budget is a testament to our ongoing commitment to drive down costs through efficiency improvements during execution,” commented Andy Brown, Shell’s upstream director. “Appomattox creates a core long-term hub for Shell in the Norphlet through which we can tie back several already discovered fields as well as future discoveries.”

The Appomattox FPS is located approximately 80 miles (129 kilometers) southeast of Louisiana in approximately 7,400 feet (2,255 meters) of water. Shell states on its website that the Appomattox hull is the largest FPS that the company has ever built. The FPS arrived at its installation site last August, having made the journey from the Kiewit Offshore Services construction facility in Ingleside, Texas.

“We are very pleased with the commencement of production ahead of schedule, as well as the cost reduction that were achieved through optimization and innovation at Appomattox,” Yuan Guangyu, CEO of CNOOC Limited, stated on his company’s behalf. “Appomattox will become a new growth driver to our overseas production.”