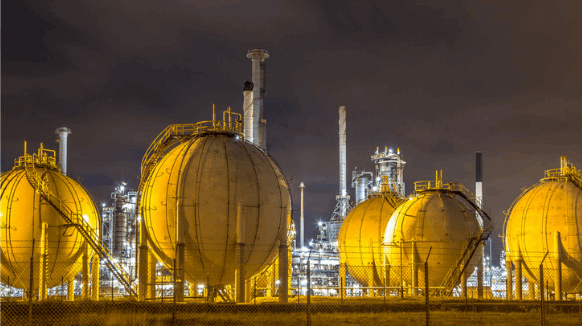 Europe is expected to be the fastest-growing market for liquefied natural gas this year and will absorb the fuel despite Russia supplying record-high volumes by pipelines.

(Bloomberg) -- Europe is expected to be the fastest-growing market for liquefied natural gas this year and will absorb the fuel despite Russia supplying record-high volumes by pipelines.

The region is seen getting 20 million to 30 million tons more LNG this year, about double the increase in Asia, Royal Dutch Shell Plc said in a presentation in London on Monday. Asia’s growth won’t be as strong as in the last two years and there will be a “resurgence” of LNG flowing into European markets, according to Shell, which controlled about 22 percent of global LNG last year.

Europe needs additional imports of gas to make up for declining domestic production. It can fill the shortfall with imports from Russia, its biggest supplier, or LNG, where global supply is expected to grow almost 35 million tons this year, or more than 10 percent of last year’s demand.

“In order to fit the amount of forecast LNG that will come to Europe, that would require Russian pipeline volumes to reduce,” Steve Hill, executive vice president for Shell Energy, said. “That’s an expectation of what will happen but it certainly is not guaranteed to happen, depending on what Russia chooses to do.”

Shell is not only a major LNG player but also a financial backer of the Nord Stream 2 pipeline that would increase Russia’s ability to ship its low-cost gas directly to Germany. If Russia decides not to reduce its supplies from last year’s record levels, Shell is “quite comfortable” that there’s still room for LNG. There is potential to increase gas use in European power generation from current levels of about 40 percent, according to Shell.

“If the LNG comes back to Europe and if Russia chooses not to turn down its production, we think that LNG volume can be absorbed in Europe through coal-to-gas switching,” Hill said. “We are at the price today in Europe at about $6 per million British thermal units where we have seen demand response triggered in other markets on previous occasions.”

As the LNG market is expected to tighten in the early 2020s before new plants start producing, Europe may struggle to attract cargoes because other regions may scramble for gas, Maarten Wetselaar, director for Integrated Gas and New Energies at Shell, said at the presentation.