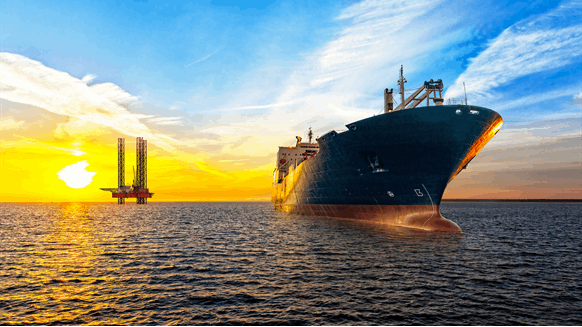 US oil companies are encouraging the Trump administration to waive a law that says only American vessels can transport goods among US ports.

(Bloomberg) -- U.S. oil companies battered by the crude price war between Saudi Arabia and Russia are encouraging the Trump administration to waive a law that mandates only American vessels can be used to transport goods among U.S. ports.

A temporary waiver of that law, known as the Jones Act, “can allow American producers to move domestic products with greater ease within the U.S.,” the American Exploration and Production Council said in a letter sent to congressional leaders Thursday and seen by Bloomberg. The group represents independent oil companies that have announced plans to scale back operations as Russia and Saudi Arabia flood the world with crude, including Parsley Energy Inc., Chesapeake Energy Corp. and Pioneer Natural Resources Co.

The move comes as the Trump administration has weighed ideas to buttress domestic oil producers amid the Russia-Saudi feud, including lowering royalty rates for crude extracted from federal lands. Continental Resources Inc. Chairman Harold Hamm told Bloomberg TV on Wednesday that he wants the Commerce Department to investigate whether Saudi Arabia is violating antidumping laws by flooding the world with cheap crude. Not everyone is on board.

“We want to be clear: Our industry is not seeking a bailout from the federal government,” AXPC Chief Executive Officer Anne Bradbury told House Speaker Nancy Pelosi, Senate Majority Leader Mitch McConnell and other congressional leaders in the letter. “This goes against the business-minded and entrepreneurial spirits of our members, who believe in the free market.”

The group did say, however, that it needs President Donald Trump’s help in ensuring “restoration of a functioning, stable, global market for oil” and backs “market-based solutions” to help alleviate the current supply-demand imbalance. That could include diplomatic efforts by the president as well as the Jones Act waivers, AXPC said.

The waiver would let U.S. companies move their oil around the country more easily, without being forced to rely on more expensive, U.S.-flagged, -crewed and -built tankers. But waivers would be vehemently opposed by U.S. shipbuilding interests and their allies on Capitol Hill, who have successfully persuaded the Trump administration to back off creating new exemptions to the law.

American Petroleum Institute Senior Vice President Frank Macchiarola said the group “supports the current interpretation of the Jones Act,” noting that “many of the companies we represent have made significant investments in line with the current law.” But companies are still free to seek specific waivers under the law, and “we appreciate the administration considering solutions to a difficult challenge,” Macchiarola said.

The group has been steadfast in stressing that it is not seeking any kind of specific policy relief for the oil industry. The best option right now is not a bailout but diplomacy, with the president engaging with Saudi Arabia and Russia to ensure markets aren’t oversupplied, API President Mike Sommers has said.

“Our industry requires constant capital investment and, at these artificially low prices, our industry cannot work,” AXPC warned. “Should this continue, American energy independence will be at risk.”